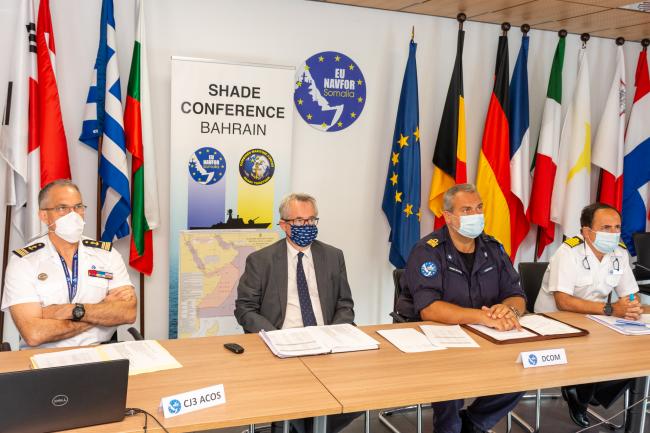 47th SHADE Conference: “SHADE is the shining example of the dialogue between civilian and military actors to keep the structural environment of Maritime Security viable, relevant and effective.”

On the 3rd and 4th of November, CMF and EU NAVFOR Somalia co-hosted the 47th Shared Awareness and De-confliction (SHADE) Conference. It was the first occasion in 11 years, that this event had to be convened virtually, as a result of the current restrictions imposed by the COVID-19 pandemic.

There was a wide participation of stakeholders including military counter-piracy operations, the shipping industry, as well as representatives of national governments and international organizations.

Three working groups convened on the 3rd November to address both piracy and maritime security issues, as well as Information Fusion and Sharing across the wider Indian Ocean, Gulf of Aden, Arabian Sea and Gulf of Oman.

The working groups addressed a broad range of issues affecting both the Shipping Industry and military stakeholders. Industry stressed the importance of continuing to receive the high standard of joint military analysis on all maritime security threats, as seen in the Industry Releasable Threat Assessments (IRTA’s) so that comprehensive risk assessments can be made by shipping companies.

It was agreed that a harmonized set of definitions and categorization of maritime security incidents would support a greater collective understanding of maritime security threats and enhance the protection of seaborne commercial traffic, which accounts for 90% of world trade. A robust maritime security architecture, based on a reliable and fluent exchange of information is essential to ensure the freedom of navigation and trade throughout the Indian Ocean Region.

SHADE is a unique forum for regional and global stakeholders to work together and agree on all these issues. CMF and EU NAVFOR remain committed to work closely with all regional and international stakeholders until the next SHADE conference in 2021 and beyond.

The continuing deployment of military assets was widely welcomed by all delegations present. The complex picture of maritime security threats relating to the Horn of Africa, including Yemen was discussed at length and with great interest by all those in attendance.

The Plenary convened on the 4th November was opened by Vice Admiral Samuel Paparo, Commander of CMF:

“It is an honour to see so many attendees join us for this important collaborative conference. SHADE represents a unique cohesion of navies, international organizations and members of the shipping industry coming together to discuss a collective approach to countering piracy and other threats to maritime security. The suppression of piracy is a shining example of the benefits of our combined efforts towards our shared goals, highlighting the importance of continued dialogue and cooperation.”

“EU NAVFOR and CMF have enjoyed an inclusive partnership, with our military partner nations, the Independent Deployer Nations of the People´s Republic of China, India and Russia, whose naval counter-piracy operations have been engaged for nearly 12 years. Their unstinting commitment to support this international effort and uphold the safety of navigation is to be applauded.”

Maritime Capacity Building was stressed on several occasions as crucial for the region and as a force for stability and resilience as highlighted by UNODC during David O’Connells brief.

COVID-19 was a recurrent theme having a considerable impact, challenging military and logistic planning by causing excessive periods of time for embarkations and private armed guards at sea.

“I want to pay a specific tribute to those mariners and seafarers, both in the civilian shipping community and our own military men and women at sea, who have borne the heaviest burden of separation from their families, when forced to endure excessive periods of time at sea. They have shown remarkable resilience and professionalism. This must not go unrecognized.”

In his final remarks, Deputy Operation Commander, Rear Admiral Corrado Campana highlighted the 11 years of success of the SHADE conference “where it has played an irreplaceable role as the recognised forum in convening military counter-piracy operations and the international shipping industry to address piracy and maritime security in the Horn of Africa region.”

“As we all strive to adapt to the challenging conditions of COVID-19, both in military operations and on merchant ships transiting the high-risk area, we all have risen to this challenge with the highest standards of professionalism.”
(Deputy Commander EU NAVFOR, RADM Corrado Campana)

Commodore Dean Bassett, Deputy Commander CMF, closed the conference by emphasizing the overarching need to strengthen coordination between stakeholders and to establish a universally accepted set of definitions in maritime security, as we are trying to adapt to the new and challenging situation COVID-19 has created.

“While piracy is supressed, the threat remains,” said Commodore Dean Bassett Royal Navy, Deputy Commander of the Combined Maritime Forces. “Forums like the SHADE Conference are crucial in order to bring members of the maritime industry and militaries together to ensure we continue to have a consensual approach to maintaining maritime security, especially given the additional challenge of Covid.”

“This 47th edition, despite the complexity of being held virtually, has been successful in addressing the different threats to maritime security in this region and to discuss the measures to mitigate them. Its success serves as a reminder on how important this forum remains.

We look forward to seeing you all at the 48thSHADE.” 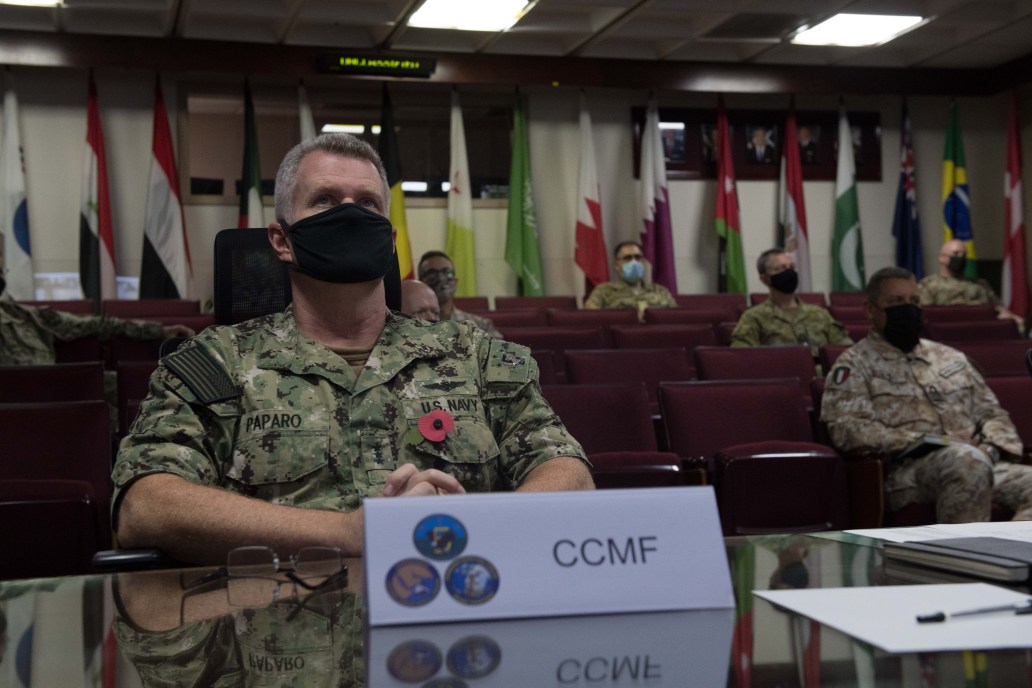 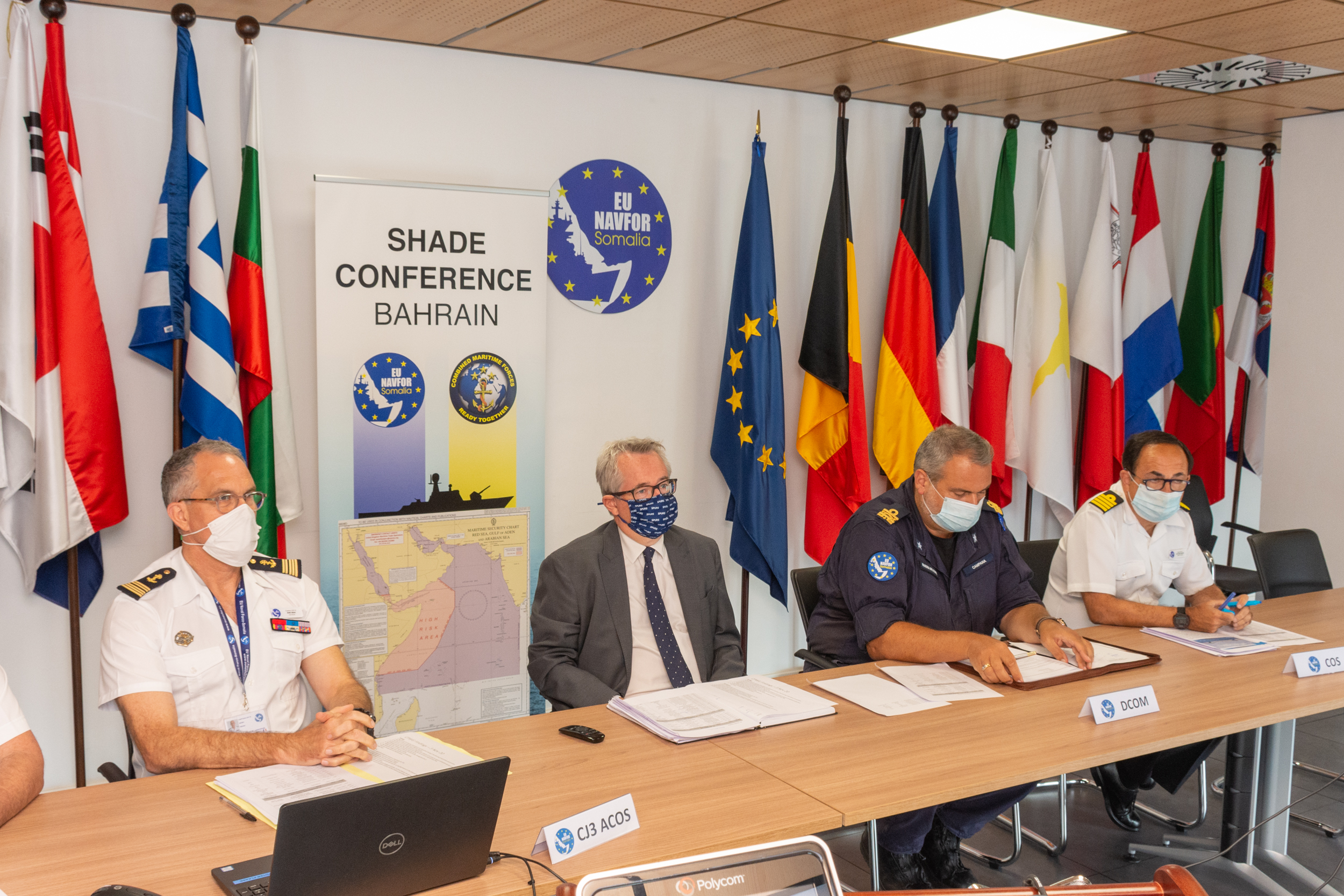 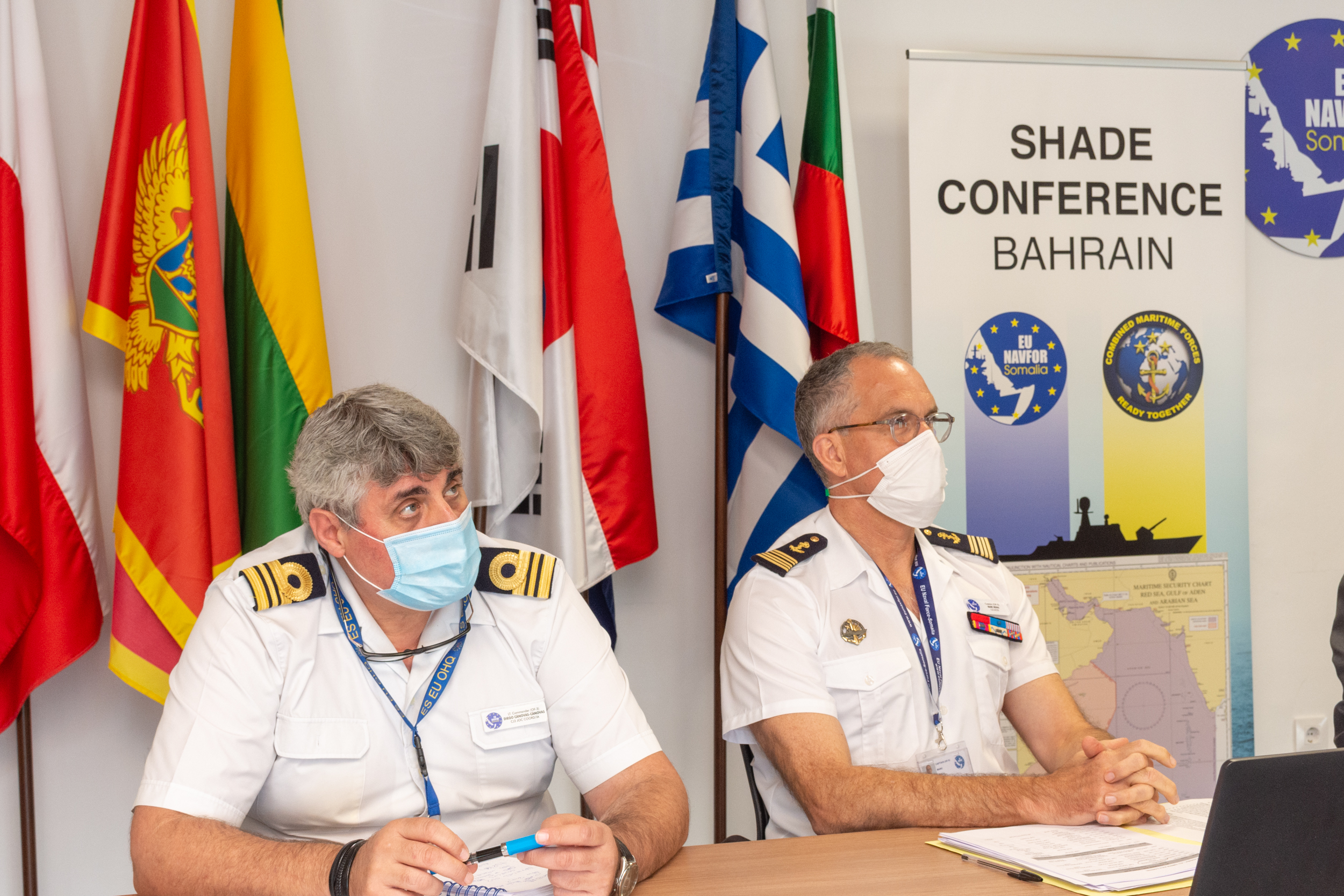 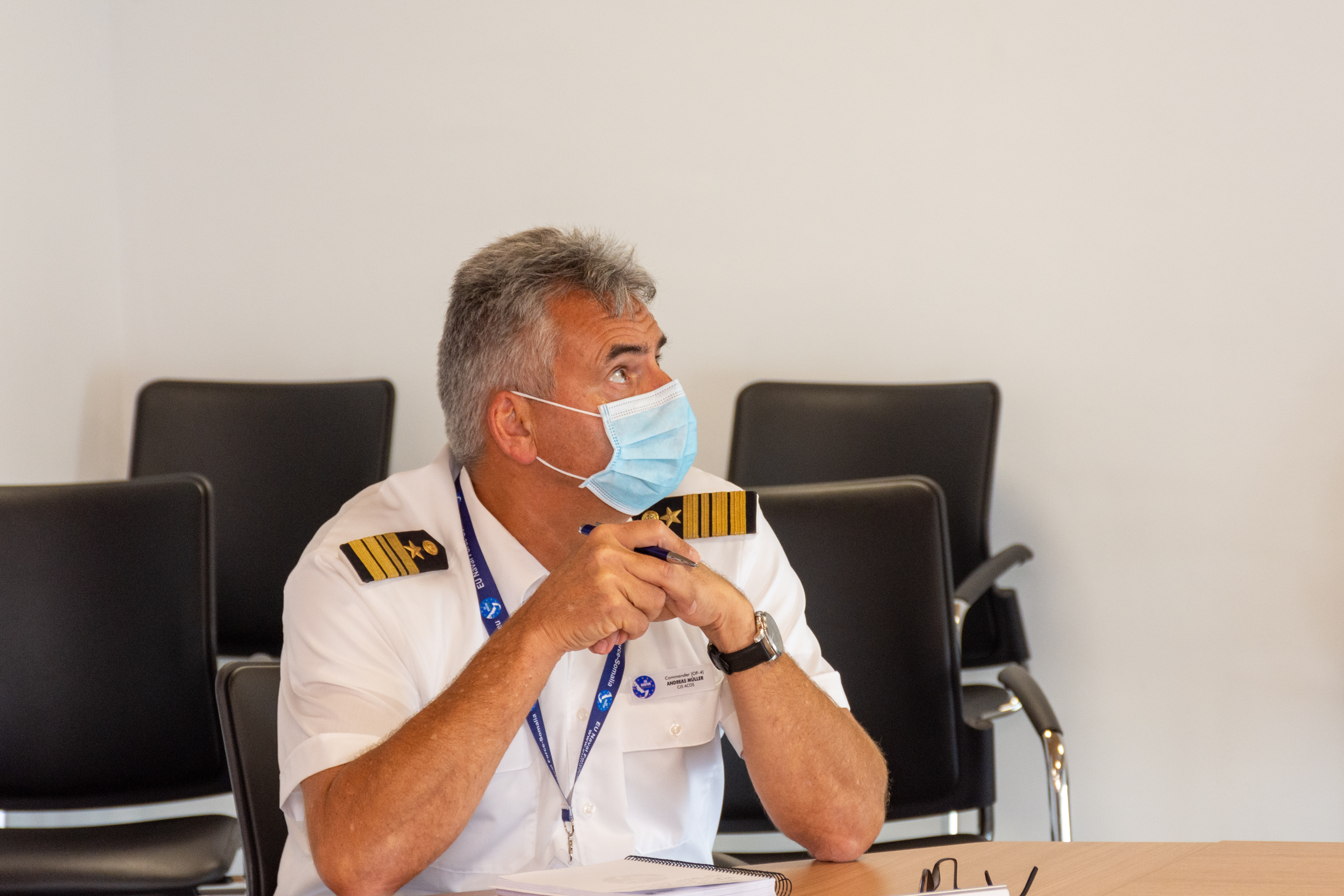 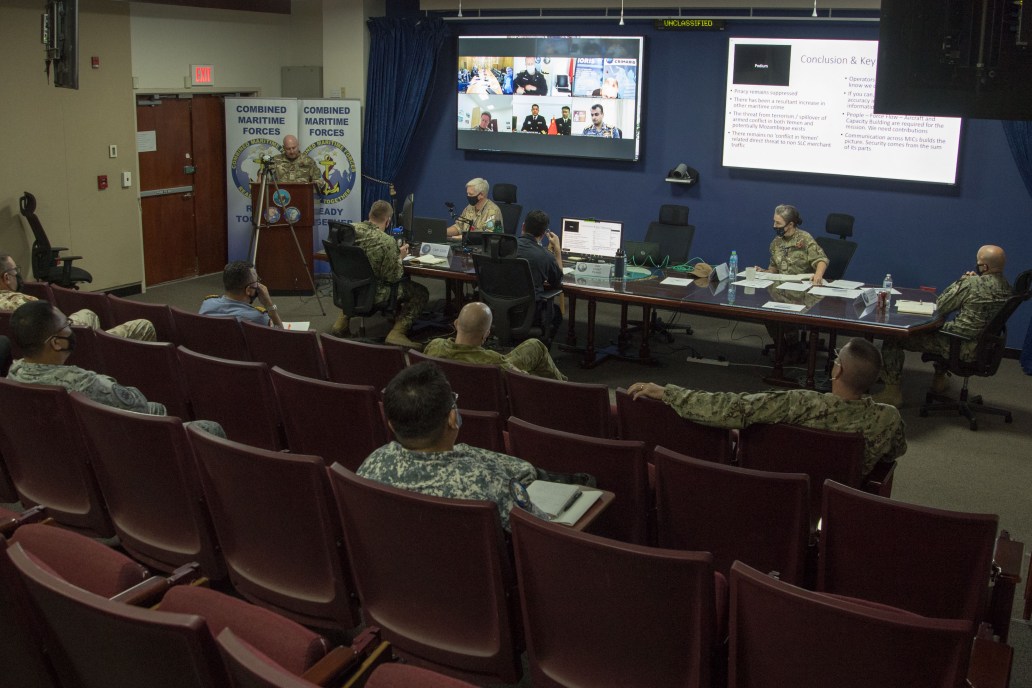 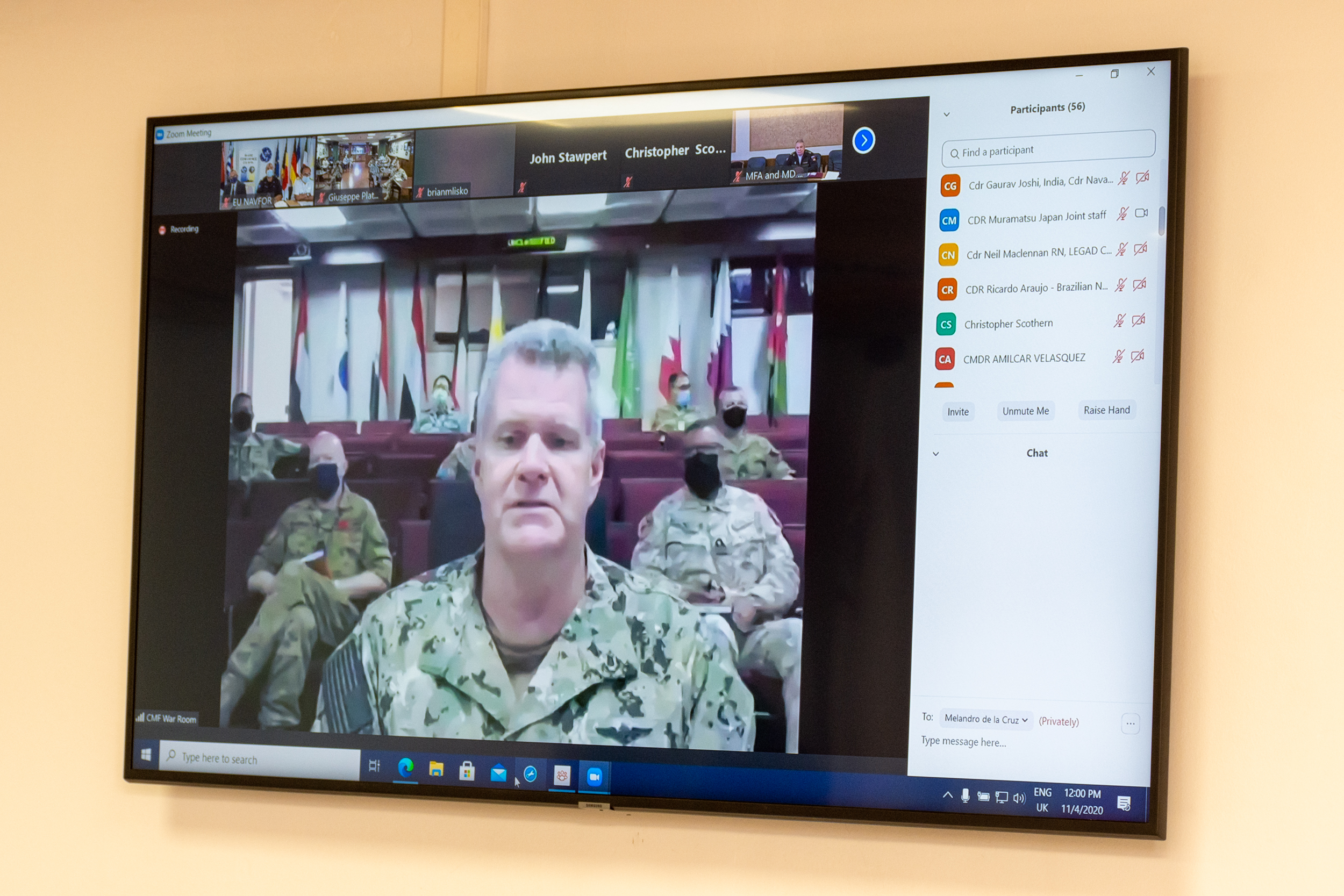 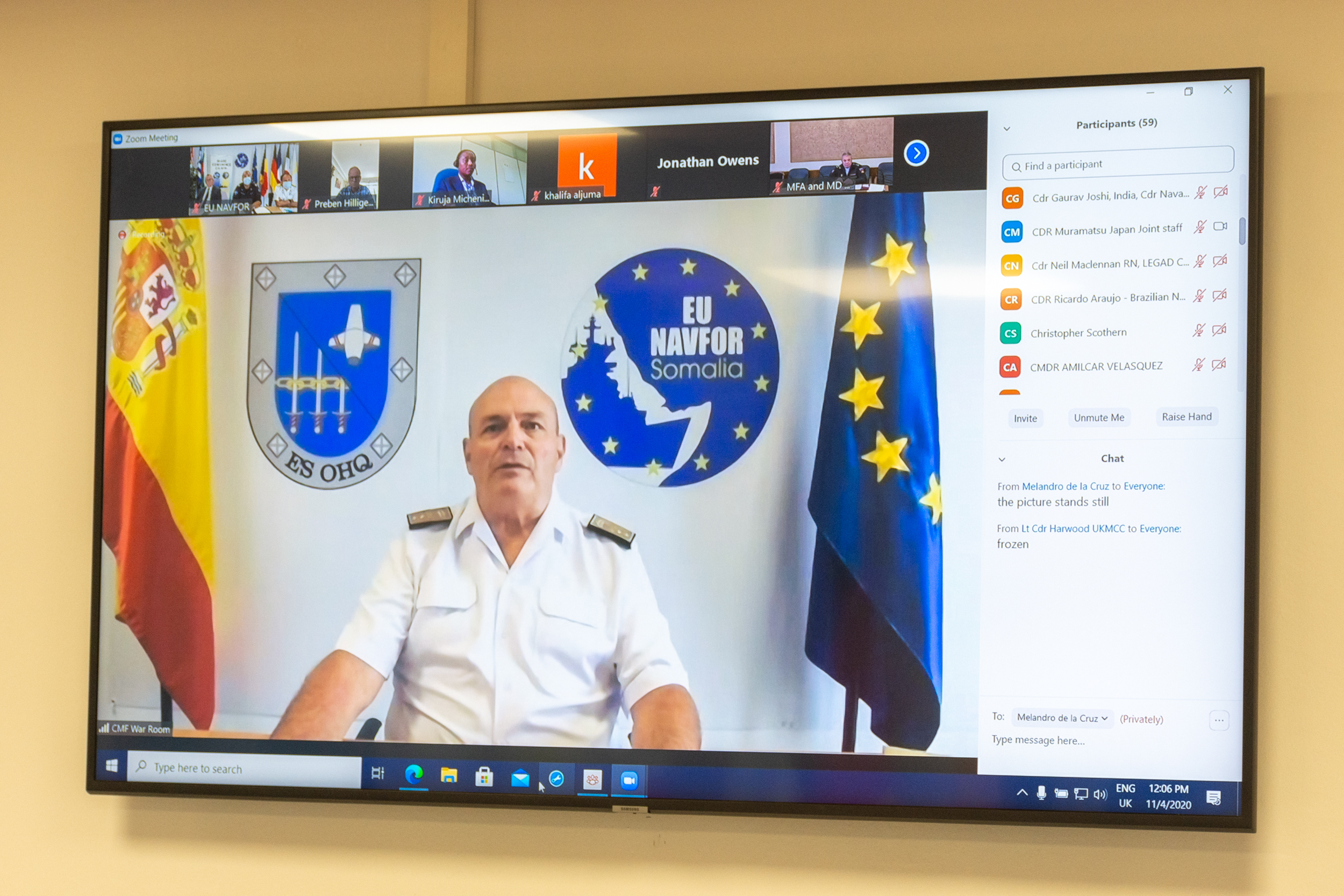 The SHADE, or Shared Awareness and De-confliction Conference, saw representatives from a number of nations, international organizations and members of the shipping industry join together to discuss combating piracy and broader maritime security issues across the Middle East.

Each year, CMF and EU NAVFOR co-chair the conference, which includes working groups and expert guest speakers to discuss issues that affect maritime security, as well as ways to improve cooperation between the mutually interested parties.

Due to the current global health pandemic, the SHADE Conference was held as a vitual event, hosted physically from the CMF Headquarters in Bahrain, and also virtually via a video link.

“I want to thank all of our guests and speakers who took part in this year’s successful SHADE Conference,” said Commodore Dean Bassett Royal Navy, Deputy Commander of CMF.

“The Conference is a dialogue which encourages all viewpoints and ideas on best practice to help drive ever closer cooperation and engagement between maritime forces and industry in the region.”

Alongside workshops with members of the maritime trade industry, senior representatives and flag officers from a variety of nations discussed the continuing importance of the CMF and EU NAVFOR partnership as a means of ensuring the maintenance of security and a commitment to deterring illicit activities in the region.

Rear Admiral Corrado Campana, Deputy Commander EU NAVFOR thanked “all those organisations, who contributed to a successful 47th SHADE Conference. Due to the COVID-19 pandemic it was the first "virtual" SHADE conference. The importance of this forum was reinforced by the breadth of different subjects addressed during the 2 days of this Conference in both the Working Groups and the Plenary. We must continue to invest in sustaining the dialogue on piracy and maritime security that is so critical to continued confidence in the freedom of navigation in this important region.”

The importance of expanding our information sharing efforts, regional capacity building, wider coordination and the existing close working relationship between CMF and EUNAVFOR will guarantee the most effective use of assets and improve maritime security in this critical maritime region of the world.

Established in 2001, CMF is comprised of 33 member nations united by their desire to maintain maritime security by countering non-state actors using the maritime environment to conduct illegal acts such as narcotics smuggling and piracy. CMF recently underlined its success with its largest ever methamphetamine haul removing 480kg of the drug from an unregistered dhow. Vessels operating in support of CMF have also engaged in rescue operations whilst on operations, including providing water, food and assistance to an Iranian ship which found itself without power or supplies last month.

EU NAVFOR Somalia is an international counter-piracy naval operation with the objective of deterring and disrupting acts of piracy and armed robbery on the high seas, protecting vessels of the World Food Programme (WFP) and other vulnerable shipping.