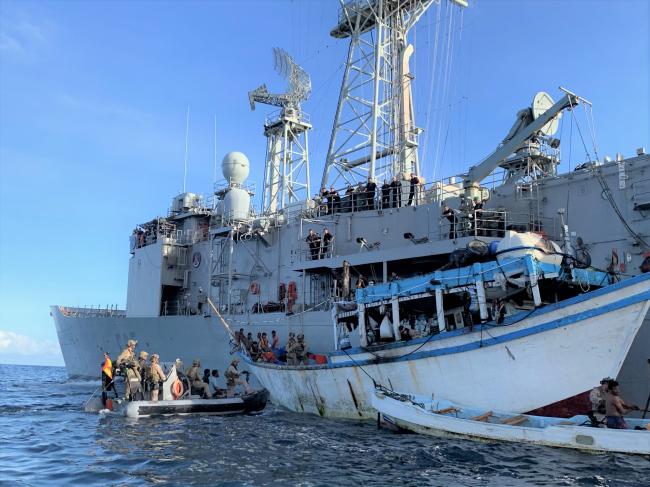 Suspects are set to reappear in court in the Seychelles on 21 June.


In a hearing today, in accordance with Seychelles law, a Court in Victoria pressed charges against five individuals accused of acts of piracy. The accused were in the presence of their newly appointed defence lawyer.


EU NAVFOR transferred the individuals to the Seychelles authorities on 26 April.


The incident began when five suspected pirates captured a fishing dhow off the coast of Somalia. The suspects proceeded to navigate the dhow along the coast, where they visited a pirate base camp and reinforced their crew with additional members. Next, using the captured dhow as a mother ship, the suspects attacked another fishing vessel, the FV Adria. This attack took place in the Indian Ocean, some 280 nautical miles off the coast of Somalia.


In self-preservation, FV Adria then conducted evasive manoeuvres and increased its speed. Another fishing vessel, the FV Txori Argi was also operating in the vicinity at the time and assisted the FV Adria as the suspects continued to chase her. After approximately one hour, the suspects approached both fishing vessels and attacked them with a rocket-propelled grenade. The Private Armed Security Teams (PAST) on board the FV Adria and the FV Txori Argi responded, and the suspects retreated.


That same day, EU NAVFOR dispatched its Maritime Patrol Aircrafts (MPRAs) and conducted a regional search, through which they were able to successfully identify and track the captured mother ship.


On 23 April, in collaboration with its MPRAs, EU NAVFOR’s flagship ESPS NAVARRA was able to approach, intercept and board the captured fishing vessel. With the support of the PAST and EU NAVFOR’s various active assets in the region—including the frigate ESPS NAVARRA and MPRAs German JESTER and Spanish CISNE—Operation Atalanta was able to control the situation and prevent any further imminent attacks.


“This incident clearly demonstrates that piracy and armed robbery at sea off the coast of Somalia have not been eradicated,” said Operation Commander Rear Admiral Antonio Martorell Lacave in an interview. “The need for a strong maritime security presence in the High-Risk Area remains critical for the deterrence and prevention of future incidents and attacks.”


Following the attack, Operation Atalanta urged the maritime industry to remain vigilant across the High-Risk Area and to comply with recommended Best Management Practises for Protection against Somalia Based Piracy, as supported by EU NAVFOR’s Maritime Security Centre Horn of Africa (MSCHOA). MSCHOA last updated the Best Management Practises for public reference in 2015, at the height of piracy attacks in the High-Risk Area.