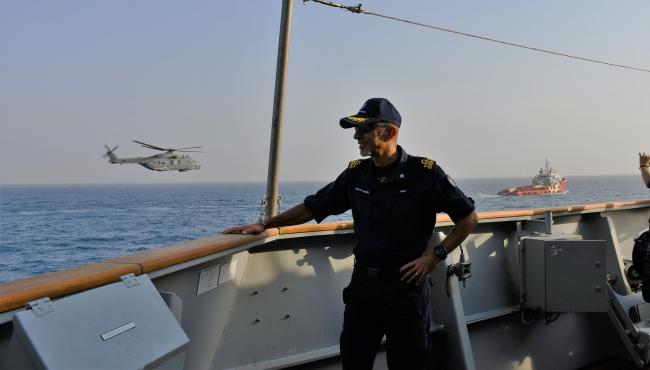 The WFP requested support from EU NAVFOR Somalia following further deterioration of the security situation in Yemen, specifically near the city of Aden. Upon that request, EU NAVFOR Somalia arranged for Operation ATALANTA's Italian Flagship Antonio Marceglia, to escort the WFP-chartered vessels safely to Djibouti.


In addition to deterring piracy and monitoring fishing activity off the Somali coast, one of EU NAVFOR Somalia Operation ATALANTA’s mandated, core tasks is to protect WFP vessels and other vulnerable shipping as they transit the Area of Operations.

EU NAVFOR Somalia warships ensure the safe delivery of food aid to Somalia by protecting WFP vessels as they transit through high-threat areas around the Horn of Africa and the Somali Basin. In partnership with the Combined Maritime Forces (CMF) and other regional maritime security agencies, EU NAVFOR Somalia protects vulnerable vessels from the dangers of piracy and armed robbery at sea.

EU NAVFOR Somalia also embarks Military Armed Security Teams, known as Autonomous Vessel Protection Detachments (AVPDs) onto WFP vessels to act as a deterrent to pirates. Lithuania, Finland, Serbia, Croatia, Montenegro and the Netherlands have provided soldiers for AVPDs in the past, demonstrating their commitment to the EU’s Common Security and Defence Policy.

The World Food Programme in Somalia


WFP is a key partner for EU NAVFOR Somalia. The work they do in Somalia provides much-needed food aid to people in the region. Earlier this month, the United Nations reported that due to severe, prolonged drought, Somalia is experiencing the poorest cereal harvest the country has seen since 2011. Currently, the UN estimates that in Somalia: