Djibouti, a key partner for the Operation 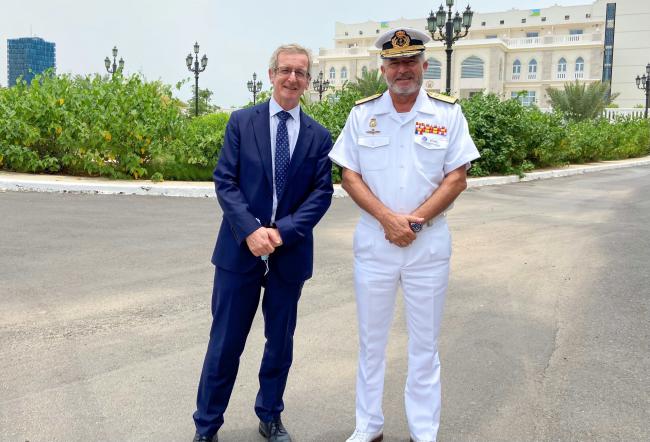 From the dawn of EU NAVFOR ATALANTA in 2008, the contribution of the Republic of Djibouti to the tasks derived from its mandate has been a key factor in the current success of this EU Operation.

The Djiboutian authorities, Armed Forces and population have always granted EU NAVFOR a warm welcome, granting their full support and collaboration in the common endeavor of striving for peace, security and prosperity in the region. One of the most recent examples of this smooth cooperation was the trilateral joint exercise that EU NAVFOR ATALANTA executed last month of May in coordination with the Djiboutian Navy and Coast Guard. This exercise, that encompassed the participation of Japanese Navy forces, could undoubtedly be considered an unprecedented success and a milestone in the relations of the nations involved.

In this scenario, taking advantage of the 38th Rotation of Force Headquarters (FHQ) of EUNAVFOR Somalia Atalanta Operation in the Area of Operations that took place last 4th of August, with the shift of Force Commander between Commodore (IT Navy) Luca Esposito and Rear Admiral (ES Navy) Alejandro Cuerda, the EU NAVFOR ATALANTA Operation Commander, VA (ESP Navy), José María Núñez Torrente, developed an ambitious agenda which included first-hand encounters with the most relevant military Commands and units present in Djibouti and prominent Djiboutian authorities in order to create valuable synergies for the immediate future of the Operation.

Thus, Operation Commander Núñez Torrente paid a visit to the naval component of EU NAVFOR ATALANTA ITS CARABINIERE (now in transit to home port after completing her deployment as flagship for the 37th FHQ Rotation) and ESPS NAVARRA (already in the area of operations since May) along with ES ORION Detachment. Additionally, the Operation Commander held an encounter with the Support Element ATALANTA (SEA) in Djibouti; a small detachment, part of the Operation Headquarters Staff, but that it is essential for the maintenance of the deployed units in the area of operations.

Highlighting the important presence of French Forces in Djibouti (FFDJ), the Operation Commander maintained an interview with their Chief of Staff, Col. Lamiral, having the opportunity to impose the CSDP medal to some of the French military personnel.

MG William L. Zana, Commander of US Combined Joint Task Force Horn of Africa (CJTF HoA), also hosted Admiral Núñez Torrente. The common message to both included a thorough explanation about the implications of the new mandate of Operation Atalanta and its new tasks. The Operation Commander had the opportunity to highlight their outstanding efforts to keep a close cooperation in our common goals and willingness to increase the mutual relations in the future.

Other visits encompassed the Deployment Support Group for Counter Piracy Enforcement Force from the Japanese Self-Defense Forces, commanded by Col. Kazuhiro Kuwaihara, and the Italian Support Base in Djibouti, hosted by its Deputy Commander, LtCor. Rando, which constitute main pillars to strengthen the mutual understanding and links for collaboration in our common goals.

Regarding the engagements with the Djiboutian authorities, the Operation Commander, accompanied by EUDEL Ambassador to Djibouti Aidan O’Hara, was received by the DJI Navy Commander, Capt. Ahmed Daher Djiama. Admiral Núñez Torrente widely acknowledged the important contribution of the troops under his counterpart’s command to the preservation of peace and security in Djiboutian waters. The relationship between EU NAVFOR Atalanta SEA element and the Djiboutian Navy has been a key factor to establish a framework in areas of common interest and areas of assistance.

EU NAVFOR ATALANTA is more than ships and its final purpose is to contribute to building a strong regional security structure that can face the current and future challenges. Under these premises, the visit of the Operation Commander to the Secretary General of the Ministry of Foreign Affairs and International Cooperation of Djibouti, Mr. Mohammed Ali Hassan, were also included in the agenda. 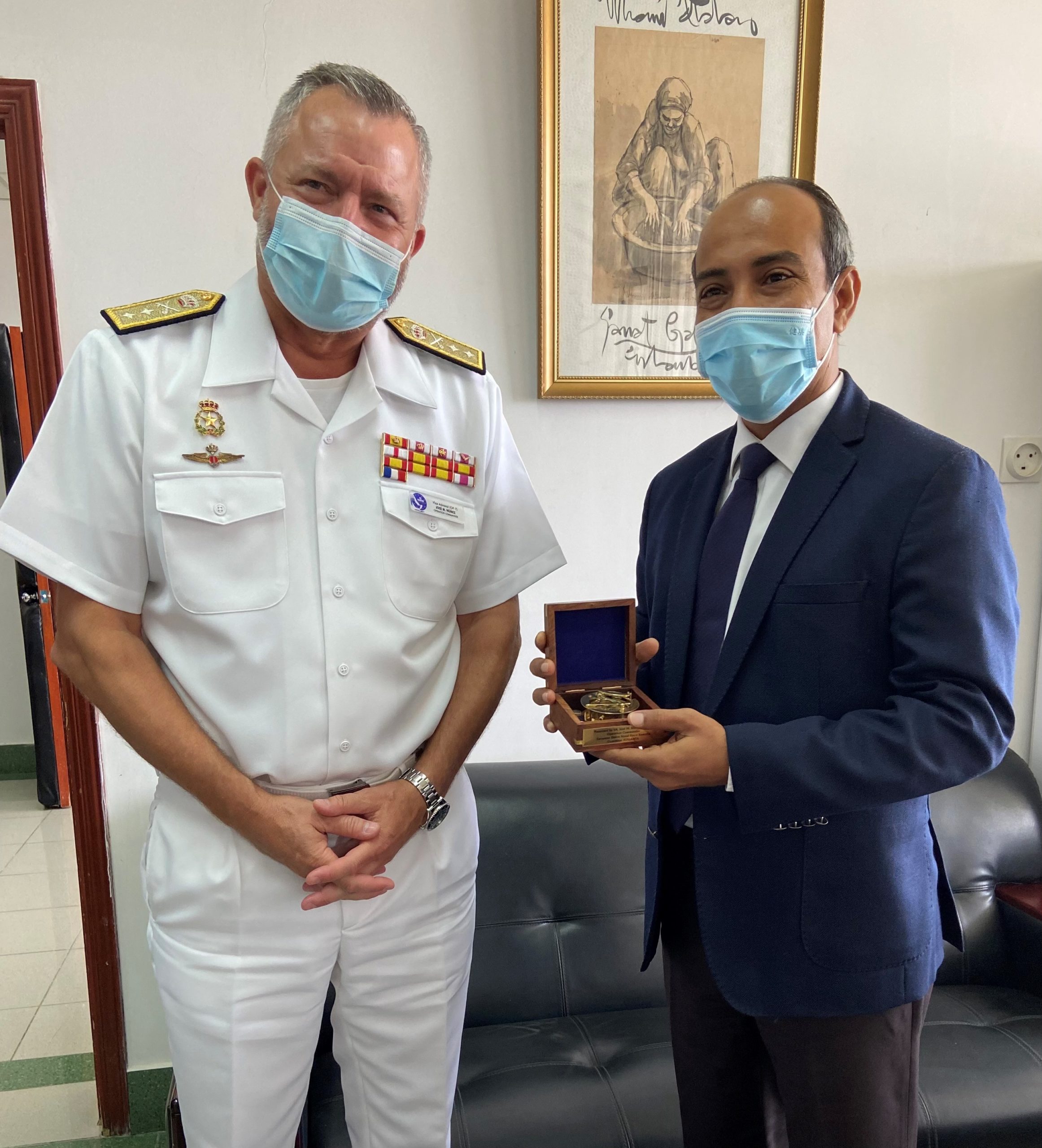 These encounters granted the opportunity to receive from the Djiboutian authorities the confirmation of their commitment towards to EU NAVFOR ATALANTA as a key partnership in the region; highlighting the importance of the imminent implementation of the new tasks included in the new mandate which will bring new opportunities to further advance in the relationship, as mentioned by Mr. Ali Hassan.

The Operation Commander had also the opportunity to maintain an encounter with the Minister of Defence, Mr. Hassan Omar Mohammed Bourhan, who was awarded the CSDP medal for his support to Operation Atalanta. The highest military authority in the country confirmed his country’s interest in the new tasks of Atalanta (weapons and drug trafficking), more related to the criminal activities that entail a challenge for Djibouti at present. The Operation Commander had also the chance to praise the importance of the recent trilateral exercise involving the Djibouti Navy and Coast Guard and EU NAVFOR forces along with Japanese forces, as a perfect example of international cooperation to achieve common goals, enhancing peace, security and prosperity in the region. 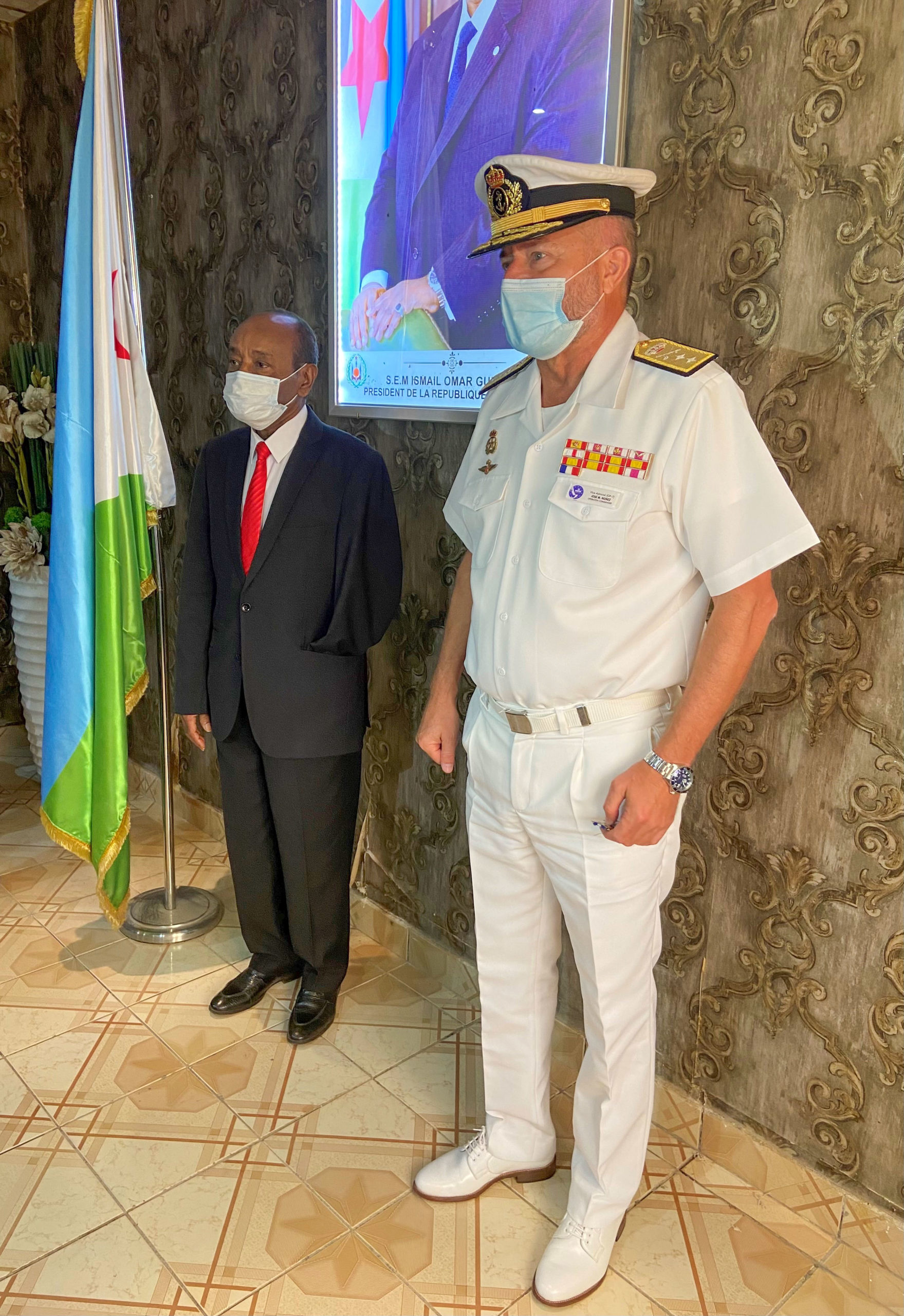 One of the last steps of such an intense agenda was the visit to the Military Cabinet, leaded by the Head of the Military Cabinet of the President and General Director of National Security, Mr. Hassan Said Khaireh. Mr. Khaireh received the assurances of the recognition of UE NAVFOR ATALANTA for his support to this EU operation which makes Djibouti a key contributor. 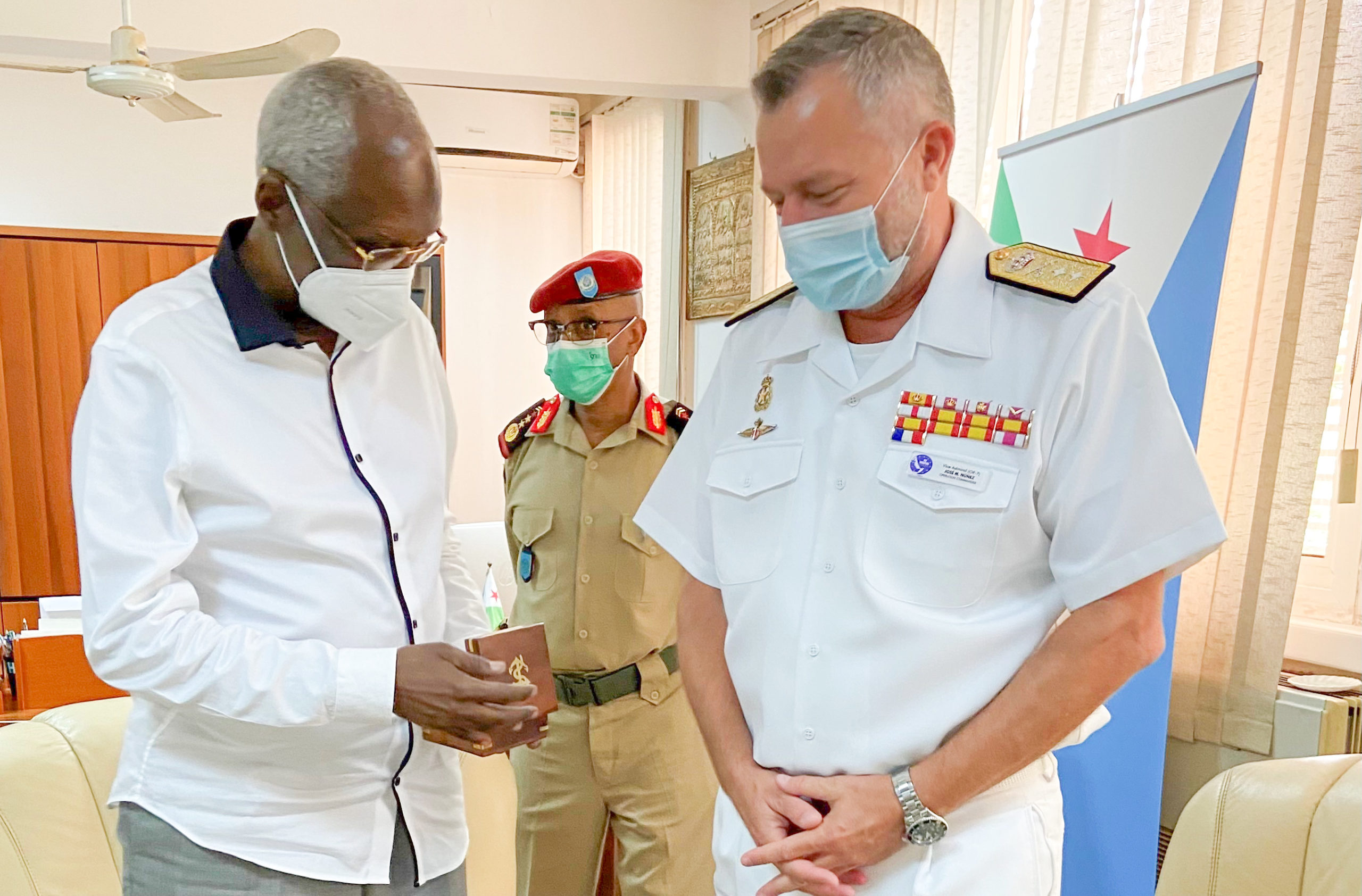 The Operation Commander had also the time to show his recognition for the Ambassador Head of the EU Delegation to Djibouti, Mr. Aidan O´Hara, for his support to the organization of the visit.  Both had the chance to highlight the importance of EU NAVFOR Atalanta as a key tool for the EU to achieve strategic objectives and to keep a robust relationship with EU partners in its purpose to enhance peace, security and prosperity in the region.