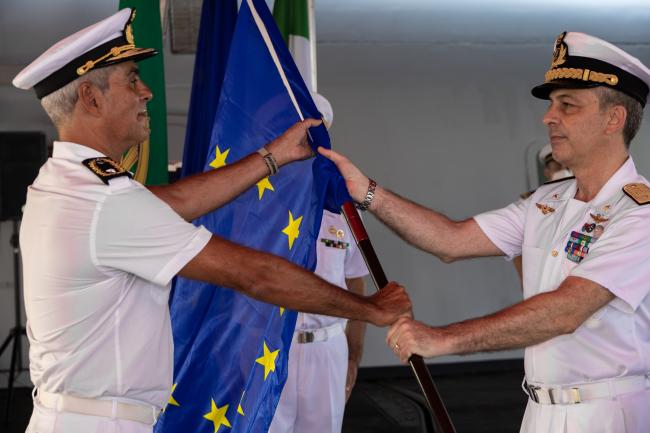 The 40th rotation, led by Rear Admiral Fabricio Bondi until the 6th of July, has completed a successful deployment, countering piracy and keeping the Western Indian Ocean safe and secure. Under its command, the anti-narcotics trafficking task was activated, allowing the apprehension of drugs of an estimated worth of 200 million Euros.

The Deputy Commander thanked leaving Rear Admiral Riccardo Marchió, in command since 7 July, for his leadership, and congratulated the 40th rotation for their efforts as “the objectives of your mission have been fully accomplished”. He took the opportunity as well to welcome Commodore Rui Miguel Marcelo, wishing him good luck and success.

After the Hand Over – Take Over ceremony, His Excellency Ambassador Aiden O’Hara, Head of Delegation of the European Union in Djibouti, has been awarded with the Common Security and Defence Policy Service Medal, in recognition of his outstanding support to EUNAFOR Somalia.

The FHQ, under command of the Operation Headquarter (OHQ) in Rota (Spain), is an embarked headquarter forward deployed to Atalanta’s Area of Operation, responsible for the Tactical Command of all EUNAVFOR multinational assets in the area. Its main responsibility is the conduction of operations at operational and tactical level, in accordance with the Atalanta Operation mandate and under OHQ guidance.

Operation Atalanta is deployed in the western Indo-Pacific region. The maritime flows through the area represent about 38% of world trade with an estimated 60% of the world’s GDP.