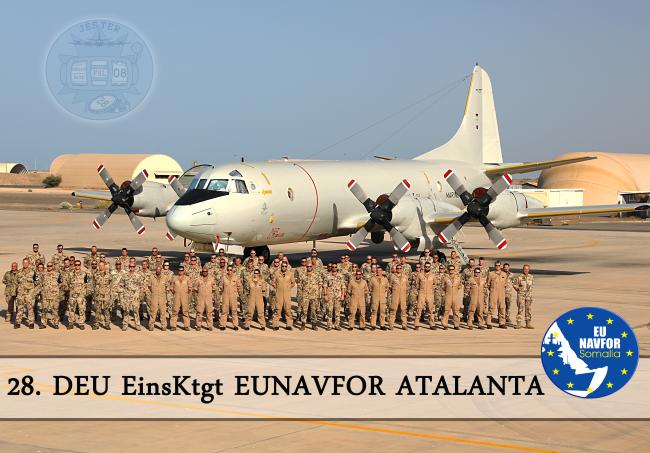 "With high continuity and personal engagement, the German Navy sailors, and also soldiers of the other branches of the Bundeswehr, are fulfilling their duty in this politically and climatically demanding region."


Djibouti, 12 June 2019—On Thursday, Operation Atalanta's German P-3C had its last flight of its most recent deployment with EU NAVFOR.


The aircraft, its crew and supporting staff were deployed to the Horn of Africa area of operations on the 18th of March 2019 to work alongside the Spanish MPRA detachment. The German aircraft enhanced the support that the Spanish MPRA provides to Operation Atalanta, with imagery intelligence, radar surface searches and surveillance.


"Germany has participated over ten years in the EU Mission ATALANTA," said Captain Brach. "With high continuity and personal engagement, the German Navy sailors, and also soldiers of the other branches of the Bundeswehr, are fulfilling their duty in this politically and climatically demanding region. With impressive professionalism, high commitment and needful pragmatism they contribute to security, stability and peace."


The P-3C, using its inherent flexibility, speed, range and response time, is used to assist vessels under pirate attack, working either alone or in coordination with other assets such as EU NAVFOR helicopters and warships.


During an aerial patrol, the aircraft is able to fly over large areas of the Somali coastline and monitor beaches that pirates have used to plan attacks in the past. The aircrew can also capture high quality imagery of dhows and skiffs that are deemed to be acting suspiciously and pass this information to the Force Commander on board ESPS NAVARRA, who then assesses the situation and takes action as necessary.


On 21 April, the German P-3C was alerted to a pirate attack in Somali waters. Although the detachment was not on alert, they were able to take off with very short notice and helped EU NAVFOR locate and liberate of the captured dhow.


Germany and Spain have both deployed MPRAs to the high-risk area since the very start of Operation Atalanta in 2008. Each of their respective crews has gained significant expertise, which has become a key contribution to the success of the EU NAVFOR operation.


The German P-3C will join Operation Atalanta again in September.