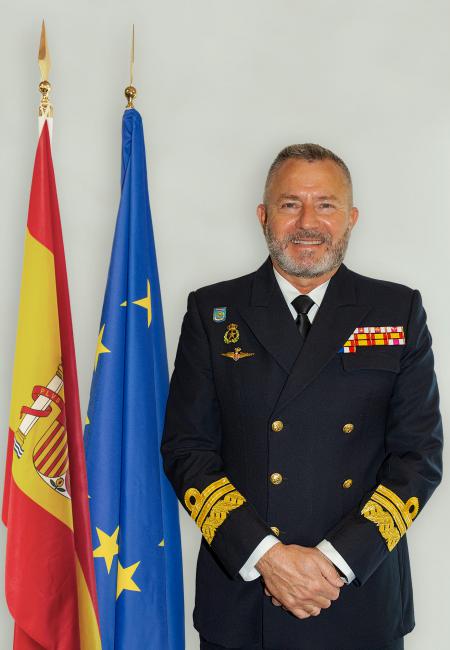 Vice Admiral José M. Núñez was born in Ferrol on November 20th, 1964. He was appointed to the Spanish Naval Academy in 1983 and graduated as commissioned Lieutenant Junior Grade (LTJG) on July 16, 1988. He later went through the US Navy Aviation Cadet Training Program to take the Naval Jet Pilot course within the Training Command. After concluding his flight training, he served with the 8th Squadron, flying the Harrier “AV-8S”. At sea, his fleet duties have included assignments as Communications Officer of Aircraft Carrier “Príncipe de Asturias”, as Commanding Officer of the Patrol Boat “Cándido Perez” and he also commanded Minehunter “Turia”. While in command, “Turia” deployed twice integrated in MCMFORSOUTH. Vice Admiral Nuñez also commanded the First Squadron of the Spanish Mine Counter Measures Force.
Other duty assignments, at sea and ashore, include: Staff Chief Operations, Spanish Fleet Amphibious and Projection Group in Operation Enduring Freedom (2002), Operation Iraki Freedom (2003) and Chief Operations of the Spanish Aircraft Flotilla. He was later appointed Chief Current Intelligence, STRIKFORNATO HQ in Naples, participating in NRF-12. He has been XO and Chief of Studies at the Spanish Naval Academy. After that, he served as Chief Plans in the Maritime Action Force Staff, as Chief of the Officers Section at the Spanish Directorate for Naval Studies and, finally, Superintendent of Spanish Naval Academy. He specialised in naval Communications, completed the Advanced Command Staff Course in the United Kingdom and has a Master’s Degree in Defense Studies of the King College in London. He also completed the Combined Force Maritime Component Commander Course at the US Naval War College.
In September 2018, he was promoted to Rear Admiral and designated Chief of Staff of the Spanish Fleet on 1st October, 2018, where he also served as Chief of Staff for the Maritime Component Commander during National Operations against the COVID-19 pandemic: ‘BALMIS’ and ‘Mission BALUARTE’.
On 23rd February, 2021, he was promoted to Vice Admiral (OF7) and was assigned as Commander of the High Readiness Maritime HQ of the Spanish Fleet. On April the 21st, he was appointed as EU NAVFOR Somalia Operation Commander.
Vice Admiral Núñez has been awarded with the Spanish Grand Cross of Naval Merit, the Spanish Grand Cross of the Royal and Military Order of San Hermenegildo and several national and international decorations.
He is married to Cristina and has three children, Paloma, Jose and Cristina. 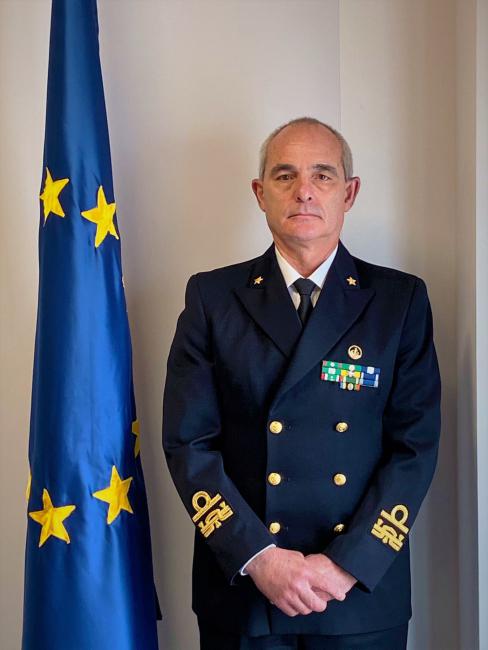 Rear Admiral Messina was born in Livorno on October 18th 1965.

He attended the ITN Naval Academy from October 1984 till April 1988 being commissioned as Ensign.

From 1988 to 2001 he served as Weapons and Operations Officer on board of several ITN Warships, such as:

From 2001 to 2003 he was assigned at the US Naval Academy in Annapolis (MD), as Instructor in the Seamanship and Navigation department.

From 2003 to 2005 he served as Staff Officer at the Naval Forces Planning Department of the ITN General Staff in Rome.

From 2005 to 2006 he was Commanding Officer of ITS Carabiniere with the rank of Commander.

From 2006 to 2010 he was assigned at the IT Naval Academy in Livorno, as Director of the Bridge Simulator.

From 2010 to 2013 he served as NATO Training Group Staff Officer at the NATO HQ ACT (Allied Command for Transformation in Norfolk, VA (USA).

From 2013 to 2014 he was Commanding Officer of the 3rd AUXILIARY SHIPS GROUP based in La Spezia with the rank of Captain ITA-N.

From 2014 to 2017 he served as Chief of Navy Personnel Support & Welfare Department at the ITN General Staff in Rome.

From 2017 to January 2021 he was Chief of Personnel Support Department at the Maritime Shore Command North Italy in La Spezia.

In February 2021 he will be appointed at the EU NAVFOR OHQ in Rota, Spain, as Deputy Commander of the EU anti-piracy Operation ATALANTA.

During his career Rear Admiral Messina has been awarded with many commendations for his participation in several naval operations (Persian Gulf, Sharp Guard, Maritime Monitor and Maritime Guard), and he also received the “Navy and Marine Corps Commendation Medal” when he was stationing at the US Naval Academy, and in 2017 he was awarded “Knight for the merit of Italian Republic”.

Rear Admiral Messina has achieved the Master’s Degree in Maritime and Naval Science at the University of Pisa. 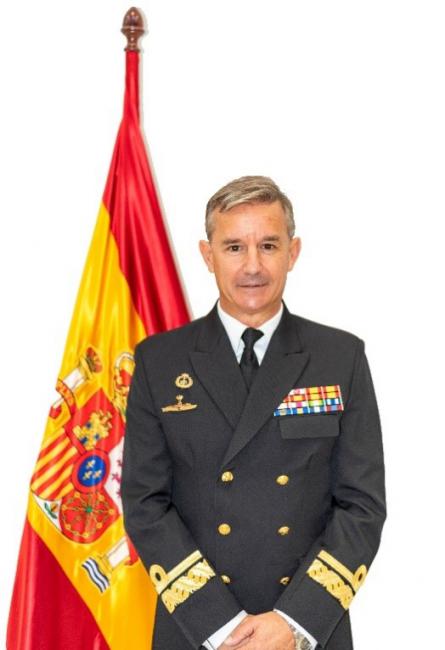 Rear Admiral Alejandro Cuerda Lorenzo was born in Cadiz in 1965, and joined the Spanish Navy in 1984. His first assignment with the Navy, after his promotion to sub-lieutenant, was on board Spanish aircraft carrier ‘Principe de Asturias’. On the 23rd June 2021, he was promoted to the rank of rear admiral.

Rear Admiral Cuerda passed the General Staff Course and specialised in communication and submarines. He is also a qualified as a basic naval diver and has completed the UN peacekeeper course.

On 4th August, he deployed aboard ESPS Navarra as Commander of the 38th rotation of the Force Headquarters of EU Naval Force SOMALIA.