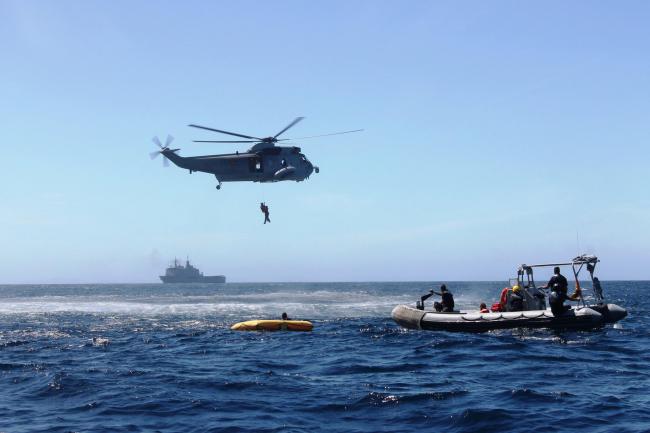 With up to 95% of EU Members States’ trade (by volume) transported by sea and 20% of global trade passing through the Gulf of Aden, EU NAVFOR gives considerable effort to safeguarding trade and freedom of navigation  through this strategic area, as it is essential for the welfare of Nations.

As part of the Operation Department and fully integrated in EU NAVFOR OHQ, the Maritime Security Centre – Horn of Africa (MSCHOA), located in Brest, is an initiative established by EU NAVFOR in close co-cooperation with the industry. MSCHOA manages EU NAVFOR voluntary registration scheme (VRS) for vessels transiting the area, and also administers an interactive website that enables EU NAVFOR to communicate the latest counter-piracy guidance to the Maritime Industry, and for shipping companies and operators to register their vessels’ movements through the region. EU NAVFOR, and, by association, CMF’s and independent deployers’ naval assets may then be dispatched as required in the event of any emergency.

Owners and operators who have vessels transiting the region are strongly encouraged to register with MSCHOA VRS, before reaching our vessel registration area to improve their security and reduce the risk of attacks or capture. Additionally, EU NAVFOR fully supports the Best Management Practices for Protection against Somalia Based Piracy (BMP). The BMPs can be downloaded here.

Further initiatives as Group Transits, that co-ordinate vessels to transit together through the IRTC, enable military forces to “sanitise” the area. Based on our voluntary registration scheme, EU NAVFOR conducts a daily risk assessment process leading to identify particularly vulnerable shipping and co-ordinate appropriated protection arrangements, either from within own forces or through other forces in the region. EU NAVFOR also conducts focused operations aimed at achieving specific effects within a given area or time window. By concentrating forces, EU NAVFOR can provide influence, deterrence and insight into legitimate activities, and thereby co-ordinate better future activities to deter piracy and armed robbery at sea, and thus reassure legitimate seafarers.