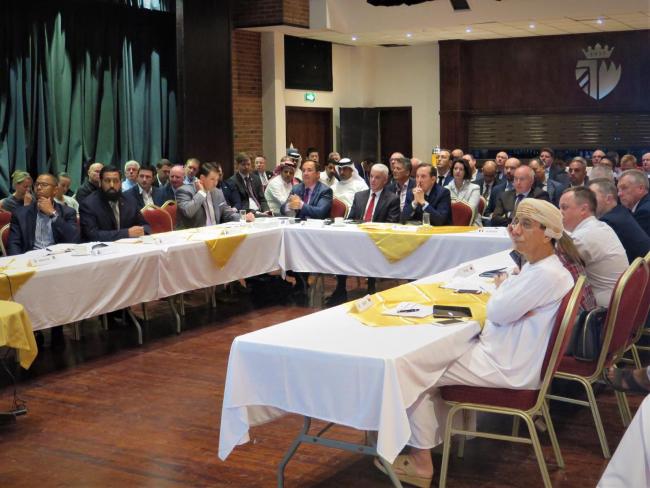 Over 100 delegates from across the maritime environment came together in the Kingdom of Bahrain. In addition to the contributing nations of EU NAVFOR and CMF, the delegates also represented the NATO Shipping Centre, Norwegian Shipping Centre, BIMCO, MARCOM, UN WFP, UN DPPA, UN DPO, Norwegian Defense Staff, UK Hydrographic Office, UK MTO, OCIMF, Chevron, Shell, BP, TK, IMT, AFRICOM, ICS and the Russian Embassy to discuss the threat of piracy and regional maritime security, which is vital to allowing the flow of commerce across the High Seas and to go about its business unhindered.

In his opening address, Vice Admiral Jim Malloy, Commander, CMF said “This group here today and the organizations you represent have played, and continue to play, a significant role in the reduction of piracy attacks in our area of operations. In my time as the CMF commander, I have stressed that our common purpose and collective engagement as global and regional partners is what right looks like when it comes to combatting illegal activity. So thank you all for being here at this conference and having a presence in this region.”

SHADE conferences have an aim of focusing on exploring how and where connectivity between civilian and military information could be strengthened. This aim is in addition to the continuous improvement of cooperation and collaboration amongst like-minded militaries and organisations and to re-emphasise the use of Best Management Practices (BMP5), which highlights a series of self-protection measures that seafarers can take when transiting the High Risk Area.

SHADE also allows delegates the opportunity to discuss and understand the challenges and opportunities each organisation has in countering piracy in the region and to maintain Maritime Security whilst ensuring cooperation and de-confliction between navies when conducting these counter-piracy operations.

Rear Admiral Antonio Martorell, Spanish Navy, Operational Commander of EU NAVFOR Operation Atalanta said; “It gives me great pleasure to meet all the delegates at the 44th SHADE Conference. Together we can share our ideas, come up with solutions and work together to keep piracy suppressed. He went onto say; “ In light of the upcoming change in the size of the High Risk Area (HRA) off the Horn of Africa in May (2019), both EU NAVFOR and CMF, stress that piracy off the Horn of Africa is by no means eradicated; it is only suppressed”

EU NAVFOR, CMF, Independent Deployer’s and the BMP5 self-protection measures adopted by the Maritime Industry, have led to a reduction in incidents over recent years. However, it is clear the piracy threat persists and the need for all maritime agencies to work closely and remain vigilant is essential to retaining freedom of navigation for legitimate seafarers.

Captain Luis Diaz Puente, the new Chief of Staff at the EU NAVFOR headquarters in Rota, Spain, said “Our operations in Rota and in Brest continue to provide the same level of support as was previously provided in Northwood,” and he went onto say,  “I look forward to exploring how and where connectivity between civilian and military information sharing centres can be strengthened. Finding new ways of increasing our collective knowledge by reinforcing and strengthening our support to the shipping industry remains key. All stakeholders should not become complacent and continue to be vigilant across the High Risk Area”.

This was re-enforced by Captain Bahuguna from the recently formed Information Fusion Centre – Indian Ocean Region, an India based nodal point of information and analysis who stated; over 120,000 ships use IOR every year;, ⅔ of the world's oil distribution and half of all container ships movements transit this region. Maritime challenges have emerged and are a real and present danger.

Captain Puente closed the conference and thanked the delegates for their valued inputs and contributions across the two days and looked forward to seeing them again at the 45th SHADE conference taking place in November 2019.

CMF´s Combined Task Force 151 has conducted counter-piracy operations since February 2009 and EU NAVFOR from December 2008, with both organisations playing a key role in suppressing piracy throughout that time. The suppression of piracy, however, remains an on-going effort with all military and industrial partners playing their part and SHADE remains a focal point for coordinating this activity.