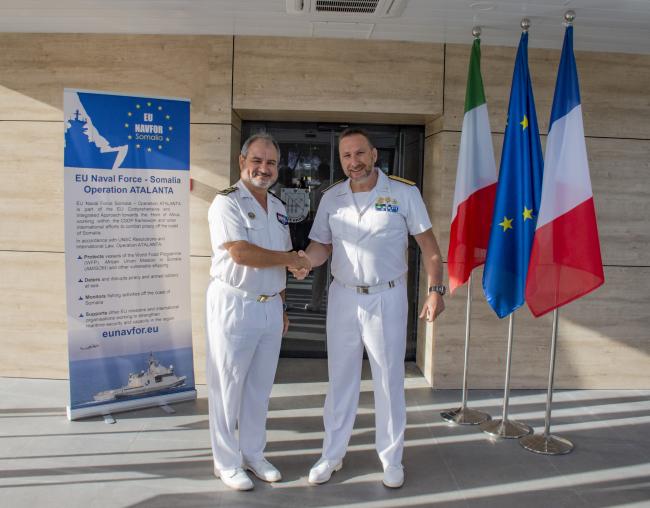 "The work we do is very important, and this operation is not at its end."


"I only have been here a short time," he said in a brief speech on Thursday. "But in just two months I have seen very dedicated work from all the staff here at the OHQ."


Rear Admiral Piegaja was born in Lucca, Tuscany on December 24th 1962. He attended ITN Naval Academy from October 1983 until April 1987, commissioned as Ensign.


From 1988 until 1990 he was the Navigator on board the Destroyer ARDITO. In 1990 he joined ITN MW community where, afterwards, he carried out several duties, including:


After attending Italian Military Joint Staff College in 2001 and obtaining a Masters Degree in International Military Strategic Studies, R. Adm. Battista Piegaja returned to active duties as Executive Officer of a Soldiers-class Frigate (ITS BERSAGLIERE) until 2003. In this role, he participated in several patrolling missions in Sicily Strait and in Operation “Active Endeavour” in MEDOR.


In regards to National duties, in June 2015, R. Adm. Battista Piegaja firstly was Head of R&D bureau. Then, in December 2015, he became the Chief of Staff (COS) at ITN Mine Warfare Forces Command – La Spezia. During this same period, he was the COS of Operation “Mare Sicuro” in MEDCENT four different times.


Among other different courses
attended by Capt. Piegaja, some of the most significant are:


In 2009 he was awarded Knight
for the merit of Italian Republic by President Napolitano.


Rear Admiral Battista Piegaja lives in Lucca with his wife, Paola and they have two sons: Federico (29) and Alessandro (27). A former Baseball player at a good level, his spare time is now dedicated to the family, but he also enjoys swimming and cycling. His preferred book author is Patrick O’Brian.