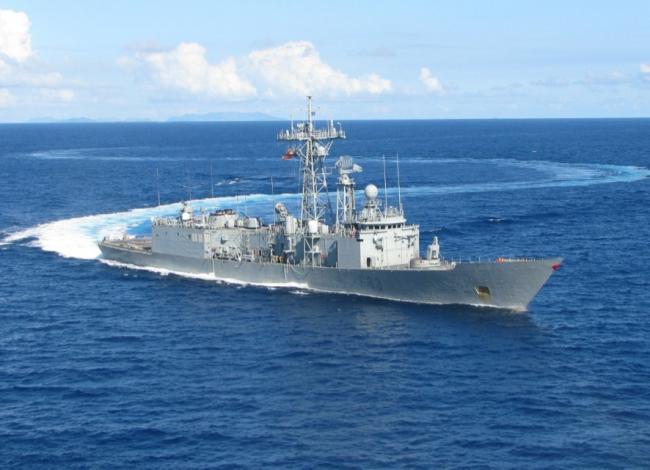 On Wednesday 7 August, ESPS Numancia completed her deployment with the European Union Naval Force (EU NAVFOR) Somalia – Operation Atalanta, and started her journey back to her home port in Rota, Spain.

This was the second time that the Spanish frigate has deployed as part of EU NAVFOR, the first having been from the end of 2008 to early 2009, when she played the role of EU NAVFOR´s Flagship, at a time when the EU’s fight against piracy in the Indian Ocean was just beginning.

During these last months, ESPS Numancia has been at sea for 112 days, sailed more than 25,000 nautical miles and has been actively engaged in a great variety of tasks.

She has conducted 38 ‘friendly approaches’ to dhows and skiffs in order to promote understanding about EUNAVFOR´s mission amongst fishermen and local sea merchants and to gather information about the pattern of life in the area.

ESPS Numancia took part in the planning and conduction of the meeting that was held off the coast of Mogadishu on 24th June, between several ministers of the Federal Government of Somalia and representatives of the European Union. The Spanish frigate acted as the force protection co-ordinator, with one of her helicopters providing armed escort to the transport helicopters from frigates NRP Alvares Cabral and FGS Augsburg.

ESPS Numancia and her helicopters performed two medical evacuations during their deployment. In the first one, a crewmember of the British replenishment ship RFA Fort Victoria had fallen ill with serious symptoms, and was subsequently airlifted to Salalah, Oman. In the second, two crewmembers of the merchant vessel MT Perla, initially assisted on board the Australian frigate HMAS Newcastle, where taken by the Spanish frigate to Victoria, Seychelles, where they could be treated at the local hospital.

When the merchant vessel MV Albedo sank off the coast of Somalia, ESPS Numancia was the first ship to arrive at the anchorage and her Commanding Officer took charge of the Search and Rescue efforts, which for the first two days were performed by the frigate, her helicopters and the Spanish Maritime Patrol Aircraft based in Djibouti. ESPS Numancia also conducted surveillance of the pirated fishing vessel FV Naham 3.

Whilst in port, ESPS Numancia conducted three Local Maritime Capacity Building training events, with the Djiboutian Coast Guard, the Seychellois Coast Guard and the Tanzanian Navy, in support of EUCAP NESTOR. The Commanding Officer of the frigate also paid a visit to the Seychelles Coast Guard Base in Victoria and to an Omani corvette in Salalah.

After four months in the Area of Operations, ESPS Numancia has been relieved by ESPS Meteoro, who joins EU NAVFOR for the first time. The Spanish Navy has maintained a permanent presence in operation Atalanta since it began at the end of 2008; actively contributing to EU NAVFOR´s successful efforts to fight piracy off the Horn of Africa.