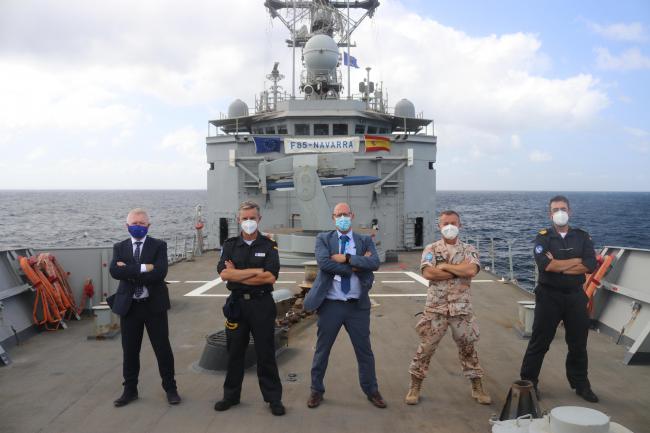 Following a long period of COVID-19 imposed virtual meetings, the new representatives of the EU Delegation to Somalia got together with the commanders of EU NAVFOR Somalia, EUCAP Somalia and EUTM Somalia for introductions and to take stock of the current activities.

During the meeting, Rear Admiral Alejandro Cuerda, Force Commander Operation ATALANTA, Brigade General Fabiano Zinzone, Force Commander of the EU Training Mission for Somalia, and Mr Chris Reynolds, Head of Mission of EUCAP Somalia, briefed the EU Delegation representatives on their specific mandates and activities. Following the introductions, representatives moved to a discussion on how to further enhance cooperation between EU actors in the Horn of Africa in order to contribute to stabilising the country and better respond to the Somali people´s needs.

Looking back at the event, Deputy Head of Delegation, Mr Oren Wolff remarked: “It is evident that both Delegation and CSDP missions share a common vision of enhanced cooperation in Somalia, and meetings like this are crucial to reinvigorating the EU integrated approach in Somalia after long periods of COVID-19 induced challenges. We are determined to continue to expand on our collaboration efforts and enhance the EU team spirit even further.”

In his welcome address, Radm Cuerda said that “The commitment of the European Union against piracy is genuine and determined, as is its desire to help regional nations to establish a maritime security environment and to assist them in the development of the different societies in the Indian Ocean nations.”

Force commander EUTM, Brigade General Fabiano Zinzone stated: “This fruitful and interesting day on board of EUNAVFOR ESP Frigate Navarra meeting with EU missions represented a unique chance for an exchange of views and further integration of efforts by “Team Europe” in Somalia.”

Head of Mission, EUCAP Somalia, Mr Chris Reynolds complemented: “We continue to contribute to the EU security and defence sector engagement in Somalia through balanced approach between maritime and police support, in close coordination with other EU and international actors.”

The EU Naval Force is a military mission, which aims to tackle both the symptoms and root causes of piracy. The EU Training Mission, also a military operation, contributes to strengthening the Somali federal defense institutions, employing its three-pillar approach: training, mentoring and advising. EUCAP Somalia is a civilian crisis management mission that supports the development of Somali maritime security and wider police capacity.

The four EU entities work in Somalia following an integrated approach comprising diplomatic efforts, development support, humanitarian aid, as well as engagements in the field of military and civilian law enforcement and rule of law. The Delegation in Somalia is one of over 130 European Union Delegations around the world. It has the status of a diplomatic mission and officially represents the European Union in Somalia. The three operations work under the EU’s Common Security and Defence Policy (CSDP).