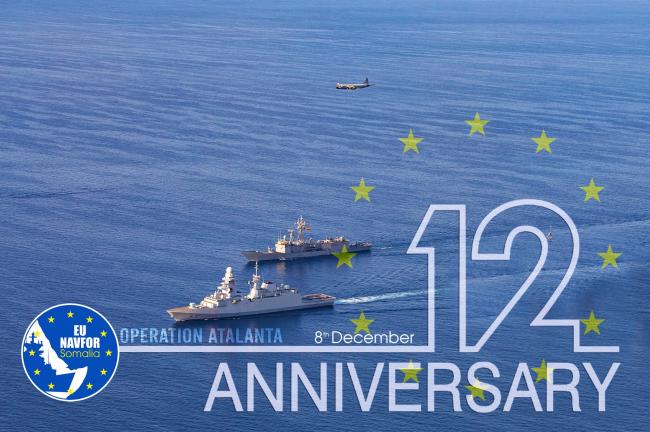 When EU Member States launched Operation ATALANTA in December 2008, it was at the height of the Somali piracy crisis.  Container ships plying east-west trade routes between Europe and Asia were under very real threat, as violent criminal groups operating from the Somali shore seized increasing numbers of vessels and held crews to ransom.  Every so often, fatalities occurred; injuries to mariners were commonplace.  International commerce was disrupted, shipping costs were rising, and seafarer welfare became a major focus for the maritime trade associations.  By the height of the crisis in January 2011, some 736 mariners were held hostage at once, and 32 ships remained seized off the coast of Somalia.

In condemning all acts of piracy and armed robbery against vessels off the coast of Somalia, the Security Council United Nations Security Council Resolution (UNSCR) 1816 was unanimously adopted on 02 June 2008. UNSCR 1816 was adopted with consent of Somalia, and authorizes a series of decisive measures to combat such crimes.

As part of these measures, and in support of UNSCR 1816 the European Union launched its first military coordination action in September 2008. This formed what was initially known as EU NAVCO (EU Naval Cooperation) and evolved into what is now known as EU NAVFOR and being the first maritime CSDP operation of the European Union in which individual Member States united together under the EU flag. The European Council had already expressed its concern at the upsurge in piracy attacks off the Somali coast, which affected humanitarian efforts and the international maritime traffic. The Council had also stressed the need for wider participation by the international community to secure the delivery of humanitarian aid to Somali populations.

Over the past 12 years, EU NAVFOR has worked hand-in-glove not only with the other multinational naval forces operating in this region (NATO and CMF, together forming ‘The Big Three’), but also the navies of the independent deployers nations: China, India, Japan, Korea and Russia, which all have major shipping interests present.

With the advent of Brexit, and the relocation of the Operational Headquarters from Northwood to Rota / Brest, command and control of EU NAVFOR has passed from the UK to Spain, supported by France. But it has been business as usual at sea, since military deterrence remains necessary to keep the lid on the piracy threat in international waters. As a consequence there have been no piracy attacks since April 2019.

The EU can afford to be proud of its achievements in this regard, and will likely continue to invest in both preventative and deterrent actions in order to ensure that maritime security remains in place from Suez to Socotra to Seychelles. EU NAVFOR ensures international commercial and humanitarian shipping will remain protected from the scourge of Somali pirates.