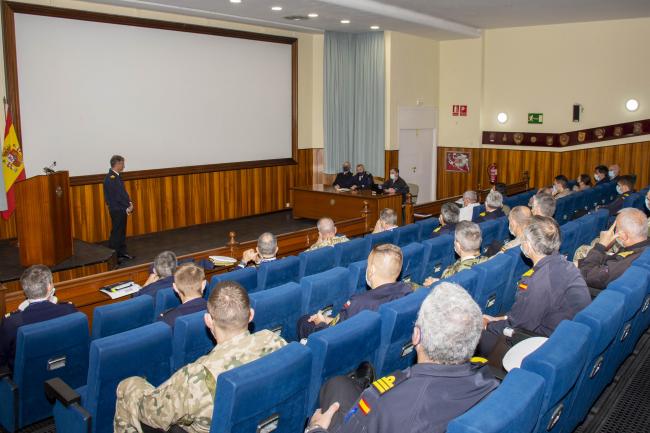 The 38th Atalanta Force Commander, Rear  Admiral Cuerda, visited the Atalanta OHQ in Rota (Spain) to offer his impression on the operation, after successfully holding command from August the 4th to December the 14th, 2021.

He enumerated the major efforts, hardships, constraints and successes of the operation, alongside with his unconditional thanks to both his seniors “for permanent trust”, and his subordinates “for sincere loyalty”.

During his rotation, the Rear Admiral Cuerda had under his leadership a range of one to three naval assets, with the presence of ESPS Victoria, ESPS Navarra and ITA Martinengo. The Force encompassed the Orion Spanish Detachment in Djibouti, a SOMTU (Special Operation Maritime Task Unit), and an AVPD (force protection team) from Serbia and Montenegro on board of the WFP vessel Spiekeroog, under direct support. In the view of the Rear Admiral the main effort was on monitoring and elaborating intelligence from different data sources. One of the key pieces on the structure of the 38th rotation was the Intelligence cell, due to the massive and extremely sensitive quantity of data loaded and treated by the experts of the Branch. “Against what we know, we can be ready” was one of the statements of his conference.

Despite the attacks suffered by the vessel Anatolia during his command, there is  a  progressive narrative movement in Atalanta, from counter Piracy towards Capacity Building. The Rear Admiral remarked that the fight against illegal fishing is one of the main lines of action on the commitment with improving the living conditions of the Somali population, due to the strong dependence on fishery of the Somali economic frame, and the massive damage inflicted on the coastal population by spoiling their primary livelihood.

He described realistically the negative geostrategic picture on maritime security after the reduction of the HRA (High Risk Area). Measurable facts as the drawdown of commercial ships or the underestimation of the perceived threat by the shipping industry are unnoticeably increasing vulnerability at the oceans for all the actors in the area.

Cooperation, understood as an endeavour of togetherness lead by all the members of the EU on the same pursue, was, in the words of Rear Admiral Cuesta, a value much higher than a practical ability, a value to found the project of a real Union. The home of all of us, he pronounced.

Furthermore, he included the constant and friendly coordination with all the institutions deployed in the Indo Pacific Region, the concept COCOA, as the catalyst to boost the new efforts, to consolidate the former ones, and to ultimately achieve the key goal of Atalanta: To create regional arquitecture for Maritime Security in Somalia, managed on their own, by the regional states.

AGENOR, the task forces 150 and 151, AFRICOM, the France Force Commander, the Omani Institutions or the Djiboutian ones, were the main actors quoted by the Admiral to exemplify the concept of this mentioned  transcendental global cooperation.

Advance or Die, said convincingly the Rear Admiral, referring the current context of Atalanta on the verge of a crucial point of decision. The implementation of the Secondary Executive tasks, the redefinition and clarification of the legal framework for the AVPD crewmembers in port, or the conditions to operate for Atalanta whilst on the ground, are issues that should be dealt with in the short term to keep the operation fruitful and alive.

His conclusion was to remind that the problem of the criminal infrastructure in the sea stems from Land, and it is there where the solution must be sensibly and patiently found. 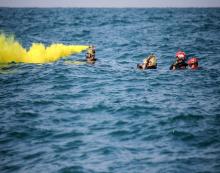