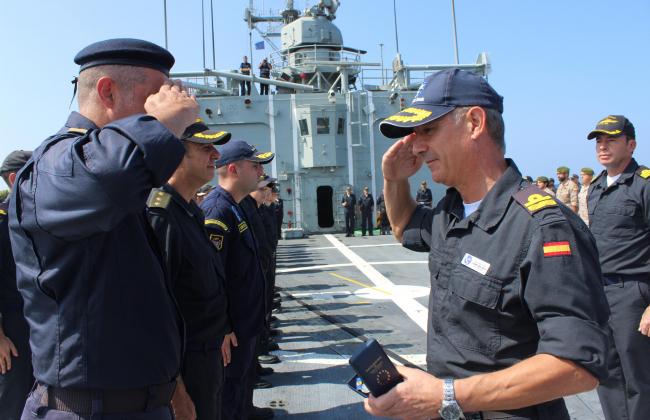 On Tuesday, 14th December 2021, in Djibouti, EU NAVFOR Force Commander, Rear Admiral (L.H.) Alejandro Cuerda handed back command of Operation Atalanta Forces to the Operation Commander, Vice Admiral José M. Núñez Torrente. A farewell ceremony was held on board ESPS Victoria, presided by the Force Commander and the Commanding Officer of the ‘Victoria’, Commander Rafael Mira Calvo, to award FHQ staff and crew members with the Common Security and Defence Policy (CSDP) Service Medal. This European military decoration is awarded to personnel of the European Union Naval Force Somalia Operation Atalanta for their effort and commitment to contribute to maritime security in the Indian Ocean.

Over the last four months, Rear Admiral Cuerda commanded warships, maritime patrol aircraft and autonomous vessel protection detachments on board World Food Programme vessels to contribute to the free flow of commerce through the Indian Ocean and to protect the delivery of humanitarian aid into Somalia.

During his command, the Force Commander has overseen various operations, conducted closely to the Somali coast, to deter pirate activities and monitor illicit activities in fishing, drugs and weapons trafficking, as well as to support EUCAP Somalia to enable local Somali maritime security and police forces to enhance their capabilities whilst, at the same time, increasing the understanding of local law enforcement agencies. These operations were flanked by interactions with local security forces along the Somali coast. The Force Commander took the opportunity, on a regular basis, to inform local Somali authorities and European Union Delegations in Somalia and in the region, on EU NAVFOR activities.

During his keynote address, Force Commander highlighted the successes achieved by Operation Atalanta in maritime security and how cooperation with regional partners, military operations and Independent Deployers has been critical to deliver against ATALANTA’s mandate. In his address to the audience, Rear Admiral Cuerda stressed that during his tour he continued to foster cooperation, coordination and the sharing of information with all other forces and agencies present in the area. The 38th rotation has actively engaged in joint exercises with CMF, Japan, the Republic of Korea and the Sultanate of Oman, as well EU member states namely France, Germany and Italy in the Area of Operations. Over the course of this rotation, great efforts have been made to continue reinforcing the Cooperation Concept of Operation ATALANTA through periodic engagements and collaborations with the Combined Maritime Forces, French Forces in Djibouti, the Combined Joint Task Force - Horn of Africa, AGENOR and the Seychelles forces.

Rear Admiral Cuerda concluded his speech by thanking all sailors and marines for their efforts in helping to keep the seas off the coast of Somalia safer for seafarers. He reminded them that regardless of their rank or position within the taskforce, they were of equal importance when ensuring the freedom of navigation for thousands of mariners, as well as in the support the Operation was giving to the Somali people, who are dependent on the safe delivery of World Food Programme aid from the sea. 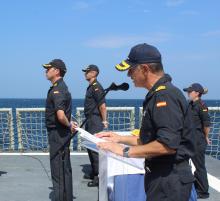 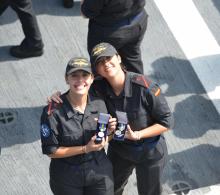 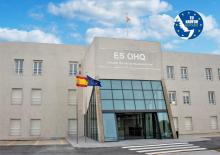 Extension of the period for submission of applications until 14 January