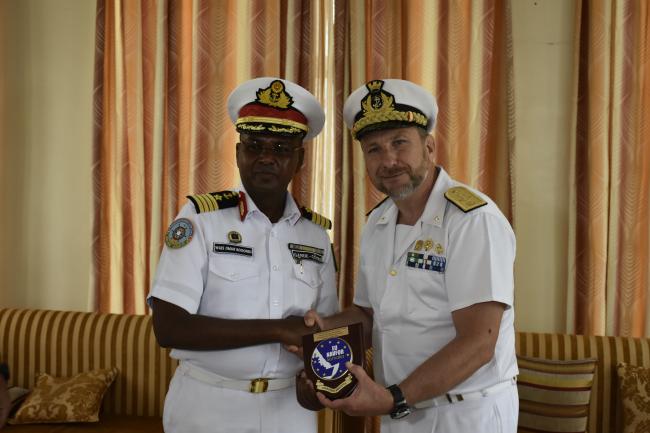 In a meeting with the Deputy Chief of Staff of the Djiboutian Armed Forces, Gen. Ali Mohamed Taher, R. Adm. Piegaja discussed how Djiboutian armed forces are a key partner for EU NAVFOR in the fight against piracy off the Horn of Africa. He stressed that ATALANTA recognizes the good work Djibouti authorities do from a political and military perspective.

"We are aware that our good relationship with Djibouti is crucial if we want to promote stability in the region," he said.


Meeting with the Chief of Staff of the Djiboutian Navy

"We are very aware that Djibouti plays a key roll in our Operation," he said. "By maintaining a good relationship with all countries within the region, we promote stability in the Horn of Africa. To this objective, Operation ATALANTA recognizes the outstanding work that Djibouti authorities do.”

EU NAVFOR staff took the opportunity to explain the new Cooperation Concept ATALANTA (COCOA) to Commander Djama. COCOA is a mechanism that EU NAVFOR developed to increase synergies with regional states and military actors present in the region and to complement each other efforts in a pragmatic, flexible but predictable way.

Mr. Djama expressed that the Djiboutian Navy depends on EU NAVFOR Somalia for security in the waters off the Horn of Africa.

In a meeting with the Coast Guard Colonel Wais Omar Bogoreh, R. Adm. Piegaja again had the opportunity to explain COCOA to him and his staff.

"We have illegal activities 24 hours/day in our area, and maritime security is a important issue in this part of the world," said Colonel Bogoreh. "Our coast guard is an example of efficiency in the region, but EU NAVFOR support is still needed in the Horn of Africa."