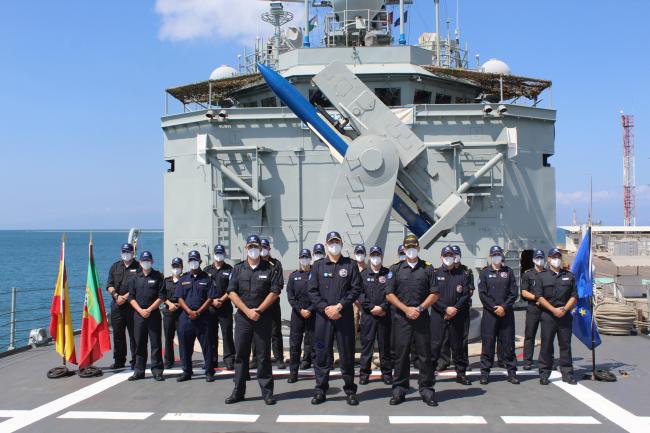 During his first impression report, he highlighted the level of responsibility  of his position due to the legacy of success and duty of the former thirty-eight predecessors in the fight against piracy, and armed robbery at sea.

On a tactical level, he stressed the major effort of counter-piracy forces in the region, the seafarer’s implementation of Piracy-specific Best Management Practices and the use of Private Armed Security Team, and how it has led to the suppression of piracy, even though it has not been eradicated yet. Consequently, Commodore Pereira expressed the need for ATALANTA to carry on its endeavour.

He considered his main goal to be the protection of World Food Programme vessels and other vulnerable shipping, and the contention of piracy and armed robbery at sea, ensuring the freedom of navigation in the area of operations.

Furthermore, the Commodore declared his intention to put additional effort into the monitoring and reporting on illicit activities in the region, such as drugs and weapons trafficking, illegal, unreported, and unregulated fishing, and illicit charcoal trade, contributing to uphold maritime security in the region.

In order to get the mission accomplished, the Force Commander will put all his efforts to promote the Cooperation Concept of Operation Atalanta, reinforcing the interactions with the Combined Maritime Forces, the cooperation with the European-led Operation AGENOR and the activities with the independent deployers, contributing to an increased maritime security cooperation in the region.

Hoping the COVID-19 situation allows us to return to pre-pandemic situation, Commodore Pereira aspires to reinforce the cooperation with EU sister missions and regional actors, since, in his view, this is the only way to reach the desired end-state in the region with a tolerable threat level of maritime security.

Commodore Pereira is not as stranger to maritime security. Throughout his career, he has participated in several maritime operations. He was also deployed NATO Operation Sharp Guard and Operation Active Endeavour, both in the Mediterranean. In 2007, as XO of NRP Álvares Cabral (FFGH class Vasco da Gama), he deployed to the Indian Ocean, as part of SNMG1 Africa circumnavigation. More recently, in 2012, as CO of NRP Corte-Real (FFGH class Vasco da Gama), he participated in Operation Atalanta.

“The key element for the 39th Rotation will be to continue fostering enhanced cooperation, vital for the success of the Operation. Together, we are stronger.”