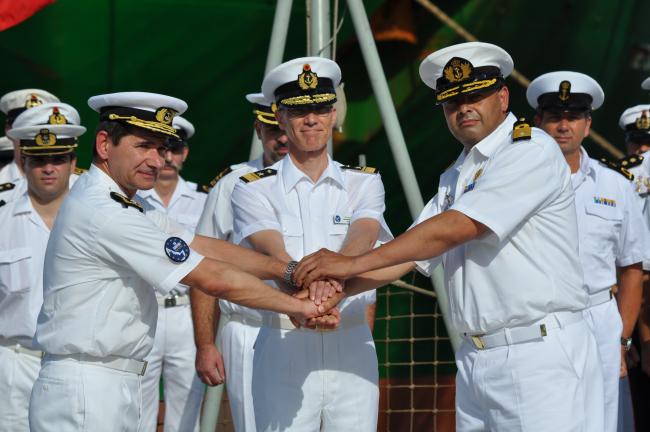 The outgoing Force Commander reflected on a very successful four months in command:

“During the past four months there were no confirmed attacks on merchant vessels within the area of operations and it has been over a year since the last ship was hijacked by pirates.  Also the protection of World Food Programme aid ships by EU Naval Force warships has ensured that over 21,000 tonnes of food and other aid have been safely delivered to the Somalia people. To all the units that have been part of EU NAVFOR force, the crew of the flagship and the Force Headquarters staff, I want to express to all of you that is has been an honour and a privilege to work with you and share the accomplishment of our mission.”

The new Force Commander Commodore Peter Lenselink will command the EU Naval Force from the Dutch Warship HNLMS Johan de Witt for the next 4 months.  During the handover ceremony he stated, “I am very honored to fulfill this important task.  It is my intention to continue to command the operation in the same proactive and engaging way as my predecessors, vigorously executing the mandate of EUNAVFOR operation Atalanta . It is also my intention to work as closely as possible with the other EU missions that operate in the region, EUTM and EUCAP NESTOR, in order to support the EU’s comprehensive approach”.

Following the transfer of command, the Deputy Operation Commander of EU NAVFOR, Rear Admiral Jean Martens, thanked Commodore Palma for his achievements and welcomed Commodore Lenselink.  He went on to say that:

“We should always remember that the reduction in pirate attacks is entirely reversible until Somalia is able to police and protect its own waters. The European Union will advise Somalia in developing a maritime security strategy and will continue to deter and disrupt piracy. At the same time, we will help support the EU’s comprehensive approach to Somalia in cooperation with other EU Missions and the other counter piracy operations from NATO and Combined Maritime Forces.”

The ceremony was attended by distinguished guests from many nations as well as representatives from the Djiboutian Authorities, other EU Missions and representatives of the units of EU Naval Force.

EU NAVFOR Operation ATALANTA main tasks are to escort merchant vessels carrying humanitarian aid of the World Food Program (WFP) and vessels of AMISOM, and to protect vulnerable ships in the Gulf of Aden and Indian Ocean and to deter and disrupt piracy. EUNAVFOR also monitors fishing activity off the coast of Somalia.