SHADE - MORE IMPORTANT THAN EVER 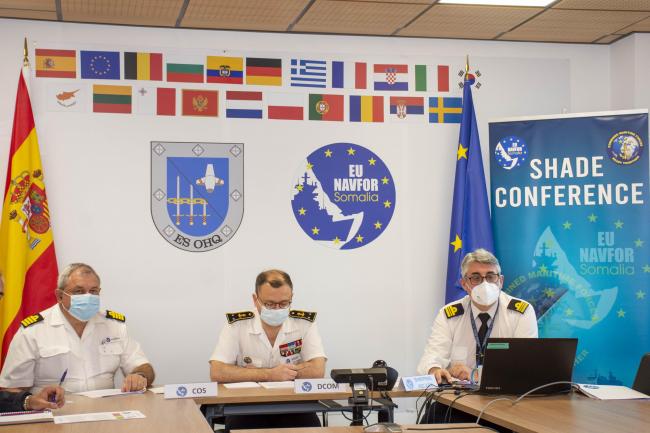 In a changing maritime security threat environment, SHADE continues to deliver and its role has been widely recognized by all attendees to the WGs and Plenary sessions, which accommodated a well-selected group of outstanding guest speakers and stakeholders.

EU NAVFOR SOMALIA OP ATALANTA and the private and institutional actors operating in the Horn of Africa have maintained a strong and mutual reliable cooperation, which has turned, undoubtedly, into a strong partnership with the shipping industry as never seen before, as well as fruitful projects both, for the neighbouring countries and for the EU.

World Food Programme representatives put an emphasis on the key role played by EU NAVFOR to protect vessels providing humanitarian aid to Somalia, and private maritime security drew out the attention to the dangers posed by the likely suppression of the High Risk Area (HRA) on the Vessel-Borne Armouries (VBAs).

Another relevant topic during the WGs sessions was the fluent and positive relations between the OHQ and the Yemeni Coast Guard, smartly facilitated by the UNODC project manager, increasing the pace of the incident clarification process and reporting from merchant vessels in transit. This effort is considerably improving re-assurance of the shipping traffic across the area.

On the 2nd of February, the plenary was the climax of a celebrated 49th SHADE, which served to introduce in regional premiere the EU Coordinated Maritime Presence experience. Also of special relevance, Prof. Dr. Christian Bueger, a renowned expert from the University of Copenhagen and Stable Seas, pointed out that in a context of proliferation of fora, and taking a holistic approach to maritime crime in the region, SHADE has proven its uniqueness to set the stage for mil-mil and mil-industry interactions, beyond diplomatic channels. Prof. Dr. Bueger stated that SHADE is the way out.

The link between SHADE and the Contact Group of Piracy off the Coast of Somalia (the most relevant political forum) goes back to its inception, and in this evolving environment, it is still up to the task to provide a venue for working groups that will deliver according to the new contact group needs.

Mr. Russel Pegg, the Shipping Industry representative, provided a much-expected update on the ongoing process regarding the suppression of the High Risk Area as we have known it so far, and he explained to the audience the fundamentals for a new more dynamic approach to risk and threat. No doubt that naval forces must understand the way the shipping industry address these issues, to deliver in a more efficient way, and this SHADE has been a priceless opportunity to re-inforce our understanding on this.

Finally, one more time we appreciated very much the attendance of China, whose Navy is the most important player in the convoy regime in the Gulf of Aden, and that stated its intentions to remain operating in the region. India showed a robust national mandate that reveals the deep commitment of a regional power in maritime safety and security.

A sincere acknowledgment to all the guest speakers and attendees.

CMF and EUNAVFOR look forward to seeing you all at the next SHADE!

EU NAVFOR ATALANTA is always committed to the safety and security of seafarers and the capacity of coastal States and the European Union advocates for regionally owned maritime security architectures and systems.

TOGETHER WE MAKE OCEANS AND SEAS A SAFER ENVIRONMENT.