The Spanish Minister of Defence visits the ES OHQ of the European Union for Operation Atalanta in Rota. 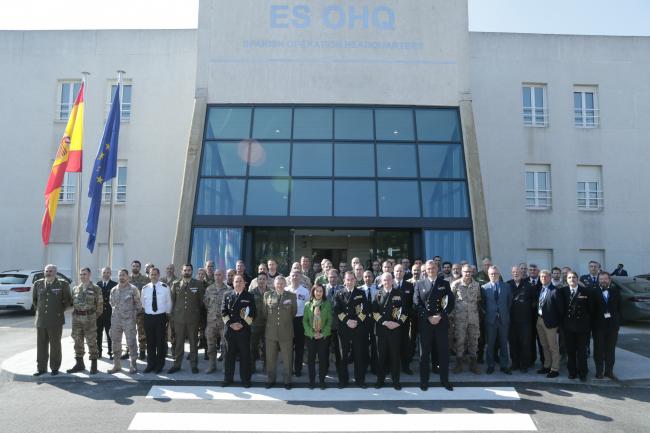 The Minister of Defence of Spain, Margarita Robles, visited today the ES-OHQ of the Operation Atalanta, of the European Union as a proof of the frame Nation support.

This ES OHQ, located in the Naval Base of Rota, has carried out the military strategic direction of the Operation, Atalanta, EU NAVFOR Somalia, since March 29th.

The European Union decided on July 30th, 2018 that the location for the direction of the military operation intended to contribute to deter, prevent and suppress acts of piracy and armed robbery off the coast of Somalia should be moved to Rota, Spain working in partnership with France in Brest.

The Minister was accompanied by the Commander of the Operation Atalanta, Rear Admiral Antonio Martorell and the Chief of Operations, Command of the Spanish Army, Lieutenant General, Fernando José López del Pozo.

The Minister toured the facilities of the Operation Headquarters, being shown the operation by Rear Admiral Martorell, and how the Joint Operations Center (JOC) works and how the merchant traffic in the area is monitored. It was also explained to the Minister the part of the Operations Cell, the maritime security center for the horn of Africa (MSCHOA), which is located in Brest, contributing with the effectiveness of the Operation. The Operation Commander emphasized "continuity is the main characteristic of the current situation, with a seamless transition being performed".

The Minister said that "the best of Spain, in its European and world projection, is represented in the effective and competitive work that is carried out in the ES OHQ of Operation Atalanta" wishing that "we can contribute to the stability and peace in the conflictive zones in the world, such as the waters of Somalia”.