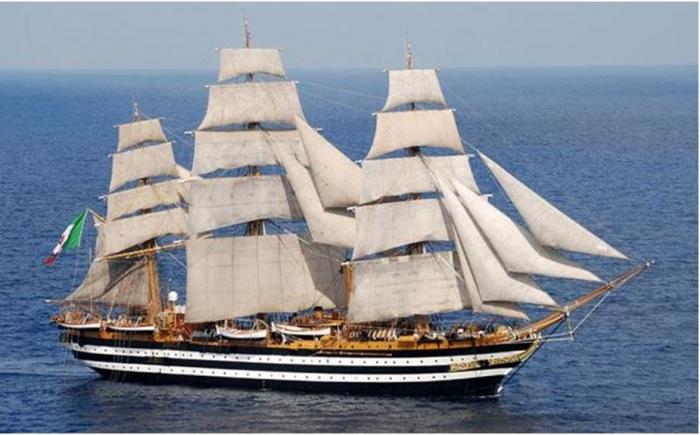 On 12th August, 75 midshipmen from the Italian school ship ITS Amerigo Vespucci, on their summer campaign at the end of their first year of Naval Academy, visited Atalanta OHQ in Rota on the occasion of its port call to Cadiz. Reciprocally, the DCOM and COS assisted to a formal lunch on board the ship on 11th August, as well as, members of the OHQ and their families were invited to visit the school ship during the weekend. 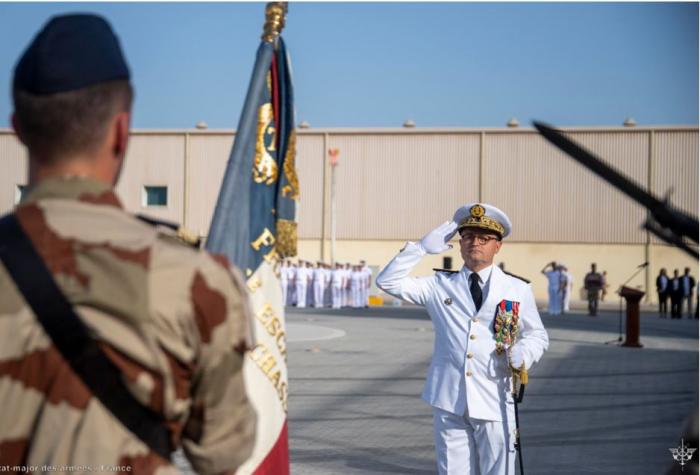 Since the inception of Operation ATALANTA in 2008, the European Union Naval Force has played a crucial role in suppressing piracy off the coast of Somalia, a role for which it has received tremendous support via the contributions of partner nations. France was and remains one of the most important and trusted contributors to the Operation.

During his term as Atalanta Deputy Commander in the first semester of 2022, Rear Admiral Slaars let an indelible mark in the OHQ, both by his professionalism and by his human qualities. His presence was crucial to ensure the great communication between ATALANTA and ALINDIEN during anti-narcotics operations. Atalanta trust in keeping our growing mutual commitment in favour of secure seas and international maritime law. 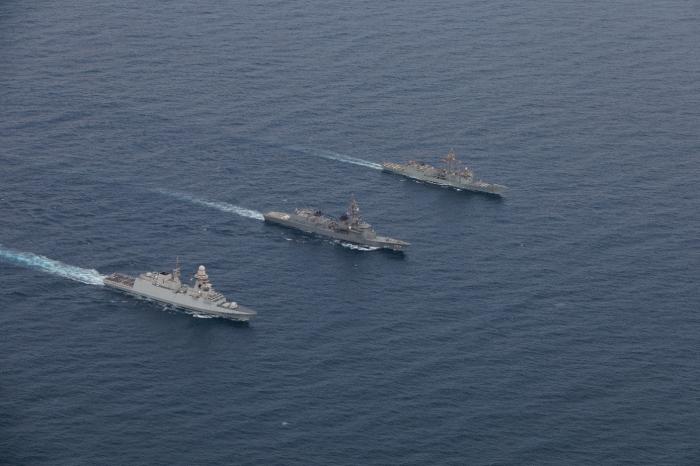 On 1st August, EU NAVFOR Atalanta Flagship ITS Virgilio Fasan conducted an advanced drill in the Gulf of Aden using the inflatable boat “Hurricane”. The exercises consisted in handling and maneuvering the vessel to improve the skills of younger helmsmen. Regular drills allow Atalanta crews to improve their readiness when facing counter-piracy actions or conducting friendly approaches with local seafarers.

Exercises to maintain and enhance naval capabilities are constant in the everyday duties of the Operation, providing the platform for useful interaction with strategic partners in the Area of Operations, such as the Combined Maritime Forces. Recently Ships from Djibouti, Italy, Japan, Republic of Korea, Oman and Spain and Indonesia sailed together in the Gulf of Oman and Gulf of Aden under EU NAVFOR and Pakistani-led CTF-151. A patrol aircraft from Seychelles and two US ships also participated. 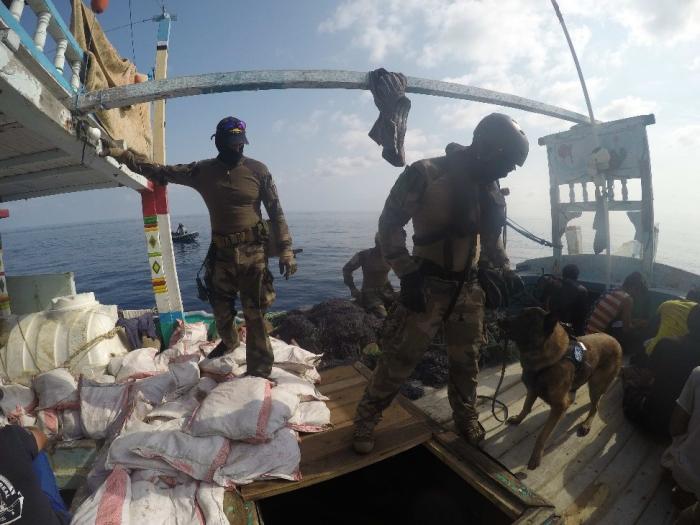 The 40th rotation, led by Rear Admiral Fabrizio Bondi until the 30th of Jun, has completed a successful deployment, countering piracy and keeping the Western Indian Ocean safe and secure. Under its command, the anti-narcotics trafficking task was activated, allowing the apprehension of drugs of an estimated worth of 200 million Euros.

The Deputy Commander thanked leaving Rear Admiral Riccardo Marchió, in command since 7 July, for his leadership, and congratulated the 40th rotation for their efforts as “the objectives of your mission have been fully accomplished”. He took the opportunity as well to welcome Commodore Rui Miguel Marcelo, wishing him good luck and success.

The 41st rotation of Operation Atalanta FHQ staff is composed by 23 members from eight different nations: Portugal, Spain, Italy, Colombia, Republic of Korea, Serbia, Montenegro and Djibouti. ESPS Numancia will serve during this rotation as flagship of EUNAVFOR Atalanta.

After the Hand Over – Take Over ceremony, His Excellency Ambassador Aiden O’Hara, Head of Delegation of the European Union in Djibouti, was awarded with the Common Security and Defence Policy Service Medal, in recognition of his continuous and outstanding support to Operation Atalanta. 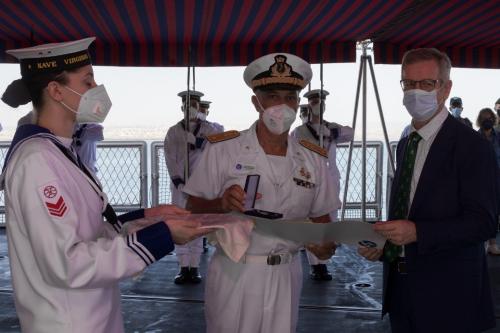 On 8th August, while patrolling in the Gulf of Aden, ITS Virgilio Fasan, conducted an advanced drill with its embarked Boarding team and organic helicopter. ESP Numancia conducted also advanced drills to maintain capacities active in case of urgent medical evacuations. 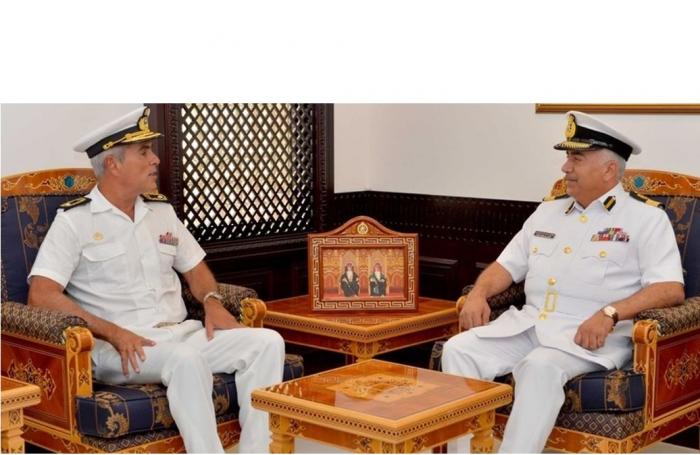 Between the 13th and 17th August, EU NAVFOR Atalanta Flagship ESPS Numancia paid a 4 day visit to Muscat as part of her deployment. Once more, the Atalanta Flagship enjoyed the support permanently provided by the authorities of Oman. During this visit, Force Commander, Commodore Rui Miguel Marcelo Correia, was received by Commodore Tariq Bin Issa Al Raisi, 2nd in command of the Royal Navy of Oman, and by the Director General of the Royal Omani Police Coast Guard, Brigadier General Ali Bin Saif Al Muqbali. The encounter provided the opportunity to exchange on maritime security issues and potential ways to enhance an already strong cooperation. 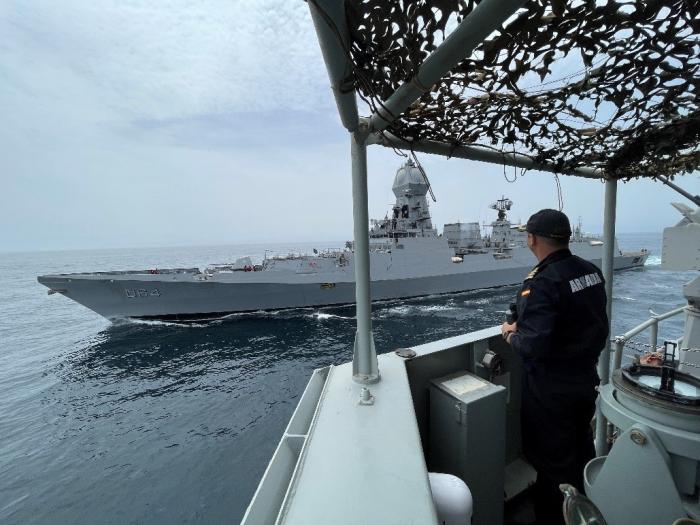 With these actions, Atalanta provides its share of concrete deliverables stemming from the EU – India Summit (May 2021, Porto), (which included in the Joint Statement of the Leaders’ Meeting clear expectations for “enhanced cooperation between the Indian Navy and EUNAVFOR Atalanta in the Indo-Pacific region”) and from the first-ever bilateral political dialogue on maritime security, which was held in January 2021.

Our relations with relevant Asian partners were also enhanced this month with another series of exercises performed, for the first time, between Atalanta assets and the Indonesian Navy. On 14th August, KRI Sultan Iskander Muta and ITS Virginio Fasan performed similar exercises in the Gulf of Aden; it was the occasion to test also the IORIS communications platform, resulting from the EU project on critical maritime routes in Indo-AsiaPacific Ocean (CRIMARIO) 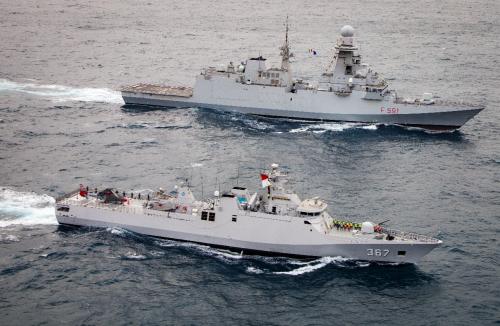 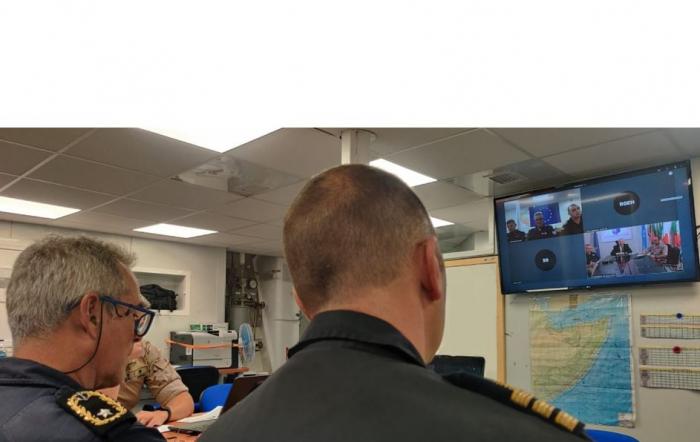 On 18th August, Force Commander, Commodore Rui Miguel Marcelo Correia, held a virtual meeting with Mr. Chris Reynolds, Head of Mission of the EU Capacity Building Mission in Somalia, EUCAP-Somalia. The meeting served to put in common topics related to the potential lines of action to enhance the existing support between these sister missions, already looking ahead of the holistic and coordinated Strategic Review of CSDP engagement in Somalia and the Horn of Africa. 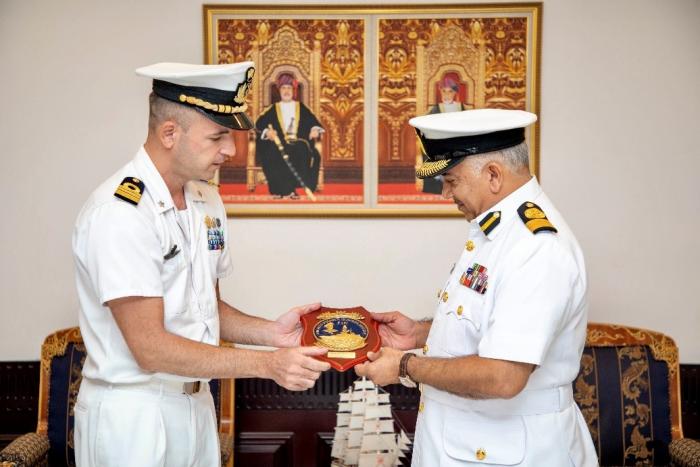 Last 22nd August the Shipping Industry announced the removal of the HRA from the 1st of January 2023. EU NAVFOR ATALANTA will continue to strongly recommend and fully support Shipping Industry in the implementation of BMP5, and echoes its statement on the need to include Reporting to UKMTO and Registration to the Maritime Security Centre – Horn of Africa (MSCHOA) as part of voyage planning and execution. EU NAVFOR ATALANTA’s mandate is not related to the existence of the HRA and ATALANTA, together with CMF, will continue to provide threat assessments to inform Company Security Officers when planning passage across the Voluntary Reporting Area (VRA) as piracy is supressed but not yet eradicated. 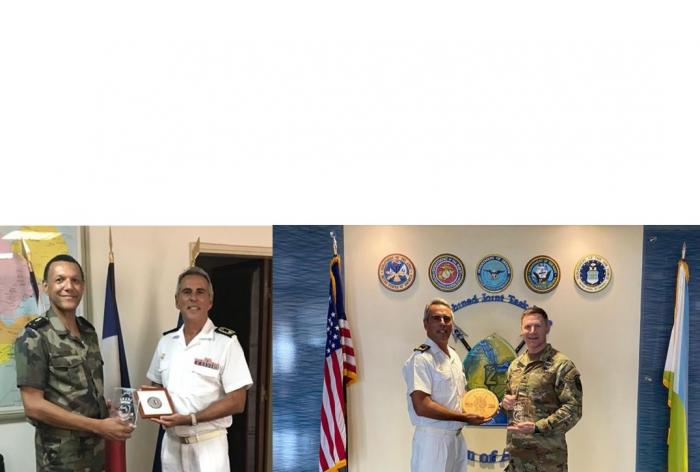 Besides the Force Command flagship, Italian frigate ITS “Virginio Fasan” and the Spanish Maritime Patrol and Reconnaissance Aircraft CISNE, these assets have temporarily reinforced the Operation in Direct Support, i.e. under Direct Support to the Operation, or in Associated Support, when the asset remains under national command: (from left to right) Italian frigate ITS “Fasan” (in Direct Support from 17.06., Force Command flagship since 22.06.2022), Spanish frigates ESPS “Numancia” (in Direct Support since 20.06.2022). During her first operational deployment, the brand-new Offshore Patrol Vessel (OPV) ITS “Thaon De Revel” (commissioned on 22.03.2022) joined the operation in Direct Support from 17. to 22.08.2022, and FS “Guepratte” in Associated Support since 20.08.2022. After a month-long absence for maintenance, ATALANTA’s MPRA CISNE returned to Djibouti on 27.08.2022. 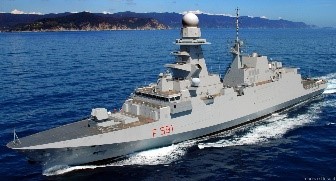 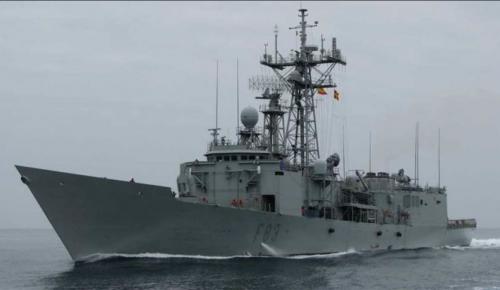 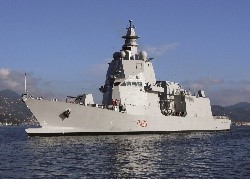 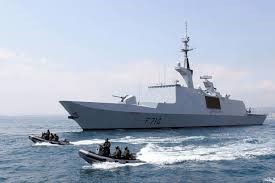 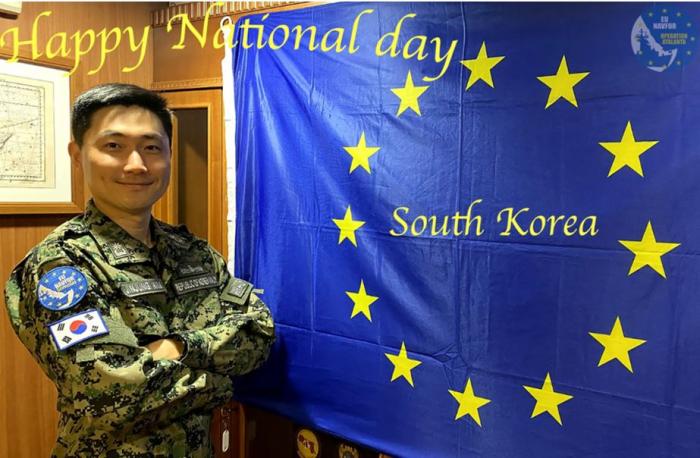 On 15th August, EU NAVFOR Atalanta commemorated the Liberation Day, national day of the Republic of Korea, one of the 4 non-EU member States of the Operation. 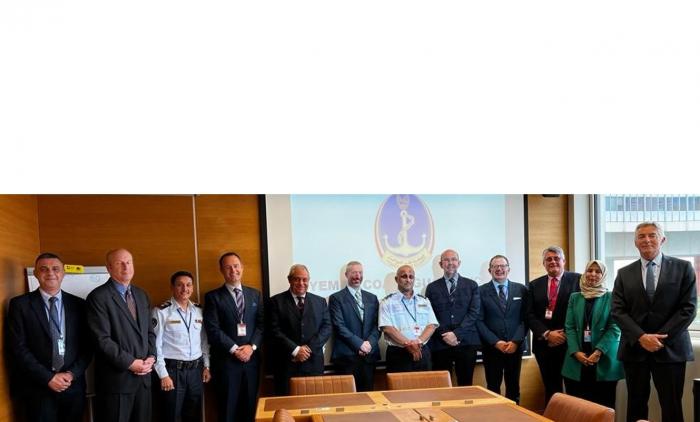 On 30th and 31st of August, EU NAVFOR ATALANTA attended a meeting on Yemen, hosted by UNODC in the International Convention Centre, Vienna. The first day the agenda covered Maritime Security in Yemen, the Gulf of Aden and Red Sea and was attended by Shipping Industry representatives online and most remarkably by the Danish Shipping in person, together with USA, UK and DNK, among other relevant actors. During the second day, the Yemeni Coast Guard representatives and UNODC Officials provided an update on their re-generation strategy.

EU NAVFOR ATALANTA celebrates, and supports, the improvement of the Yemeni Coast Guard and the progress made in comparison with last year meeting, and above all the inclusion of the Yemen maritime affairs authority, Customs and ports security as this is key for the development of the country and the welfare of Yemeni nation. EU NAVFOR ATALANTA has had the opportunity to see the contribution of Jordan Navy to capacity building in support of the Yemeni Coast Guard.  Finally, once more, it was clear the role of the EU in essential initiatives like the EU Red Sea Maritime Security Programme.